Here's a link to a free pattern for a rag doll. It's a fun way to use up scraps of cloth and yarn, and a lot of the stitching and stuffing can be done while watching TV.
The finished doll measures 15" tall and took me about 4 hours to make. The faces were painted on with fabric markers, though embroidery is another option.
The doll pattern comes from Toronto designer Amie Scott. Amie sells retro-style cotton dresses and sewing patterns on her Etsy site.
Posted by Heather Dubreuil at 12:00 AM No comments:

A free distance drawing course is being offered by the Rokeby Museum of Vermont. It has been created by Montreal-based artist Courtney Clinton, and is inspired by the experience of a young Vermont girl, Rachael Robinson Elmer (1878-1919).
Lessons will be shared every two weeks, and participants are invited to post their efforts to the course website. The course is historically-based, and encourages participants to explore the natural world around them through a sketchbook practice.
I learned about this opportunity from a James Gurney blog post.
Posted by Heather Dubreuil at 7:18 AM No comments:

I have found this downloaded package of instruction from Jane Davies to be helpful in getting me back into the studio. The point is to muck about in a guided and thoughtful way, to ask "what do I see? and "what if?" My hope is that these explorations will act as a springboard for further development.
The final lesson in the package focuses on the grid format, which relies on the use of squares and rectangles placed on vertical and horizontal axes.  We reviewed the distinction between the closed grid and open grid. The closed grid might be something like a checkerboard, where all the shapes are "locked in". An open grid would have some of the shapes overlapping, or floating freely on a background.
For my first attempts, I used collaged shapes exclusively.

Next, I turned to paint:

As I worked, I tried to notice whether I was using a full range of size, of value (dark/light), and of colour, or a more limited range. What made the grid more interesting? Transparency? Pattern? 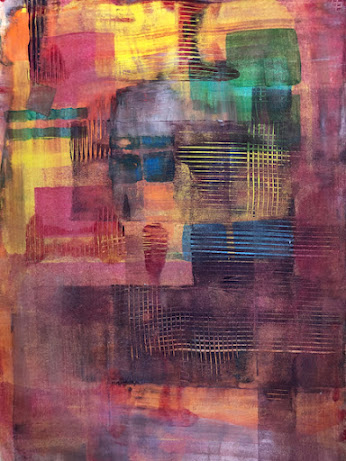 At one point, wanting to make the grid more ambiguous, I grabbed a small brayer, using horizontal and vertical swipes to distribute the wet paint. Then I took a comb to the piece, reinforcing the grid format.

The next activity required me to make several "scribble paintings" on cheap paper, with no thought to composition but with a wide range of value, varied lines and varied patterns. The idea was that the scribble painting would then be cut up into squares of equal size (or rectangles of various sizes) and then rearranged into a closed or open grid.
I can see how this exercise requires an expanded "vocabulary", which is instructive. But I was not able to compose anything pleasing from the cut-out shapes. I suppose that not all approaches suit all students. Still, I'd like to think I learned something about the value of variety in composition.

Not thrilled with the results, but I thought some of the individual squares had some potential.  Pattern, texture and transparency helped make the squares interesting:


Here's the third scribble painting, and how it was cut up and re-assembled:


The final assignment in this final lesson is to use the grid format to make an actual composition, something that we find to be interesting and pleasing. Ambiguity and pattern are to be embraced. I look forward to taking on this final assignment, and will be sure to post here. Soon! Let's see if I can embrace the "sketchbook mentality" of experimentation to expand my visual vocabulary.
Posted by Heather Dubreuil at 12:00 AM No comments:

Continuing on with Week 5 of Jane Davies' packaged instruction, I pulled out the small gestural compositions that I made in the previous lesson, using black paint and black wash. 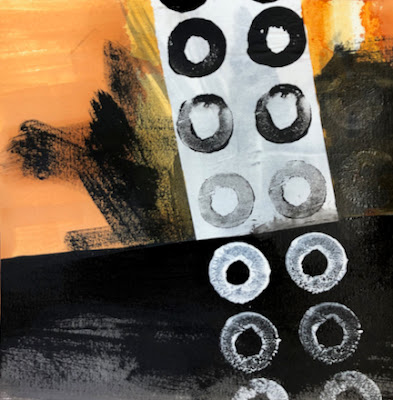 The next exercise had us go back to the thumbnail compositions made in a previous lesson. We were to choose one design, and express its shapes using paint / collage / line in various media.


I may well go back to this exercise and choose another thumbnail design to work from.

Finally, the lesson ended with self-portraits, using blind contour. I allowed myself to look at the drawing when I needed to lift the pencil and reposition it. Otherwise, my eyes were on the mirror at all times.

I am struck by how the distortions evident in these blind contour drawings express the tenor of our times.
Posted by Heather Dubreuil at 12:00 AM 2 comments:

Continuing with the downloaded instruction from Jane Davies, I embarked on Lesson 4 of Sketchbook Practice.

We began by making large gestural paintings, on cheap 18" x 24" paper, using only black and white materials: paint, ink, crayon, marker, pencil, charcoal, etc. I spattered paint with a toothbrush, improvised paintbrushes from combs and sticks, dripped and drizzled. The idea was to ignore composition. Later, we would be selecting "interesting areas" to cut out and develop. 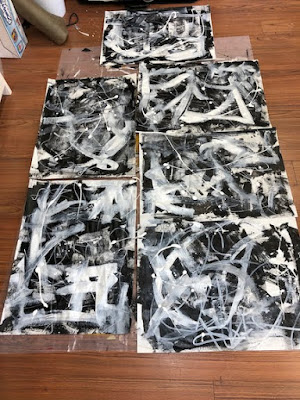 Somehow, when I am told to do this kind of thing, I begin to work very fast. The result was six large, indistinguishable messes: minestrone soup.

I am so glad that I tossed these six and began again, slowing down and becoming more deliberate, more thoughtful, just as the instructor was in her demo video, creating "areas of interest."

This time, I had no trouble isolating eight mini-compositions to develop further, from four large sheets. One of the key things was to keep distinct areas of dark and light. After gluing them down on larger,  better-quality paper, I began to develop each one in turn, extending shapes, adding shape and line. And I have another eight mini's that are also candidates as "starts".


Here are some of the results. I don't see any of these as finished pieces, but rather exercises in composition, creating variety and interesting shapes and lines. 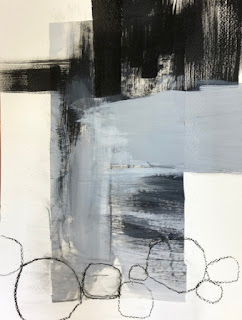 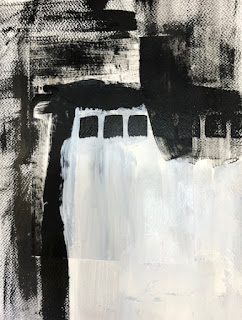 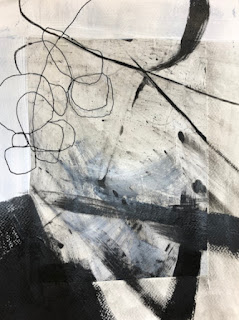 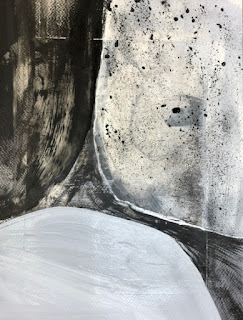 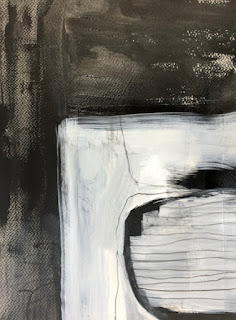 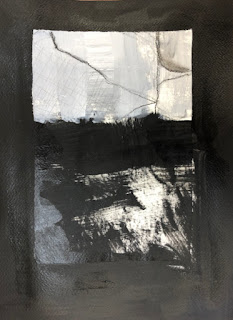 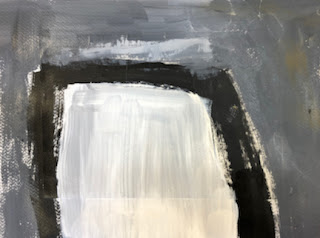 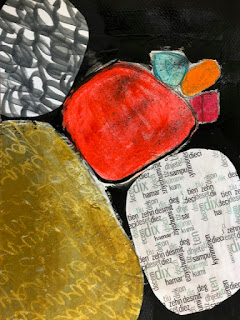 To prepare for Lesson 5, we were asked to paint a random shape/line with black paint on small (7" x 7") squares, and then to augment that with a "wash" of black paint. These will be developed later. 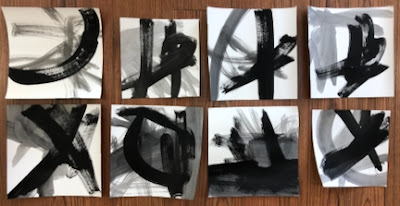 The final part of Lesson 4 was to make a rough contour drawing of an object, using a black wash and a big brush. As a second layer, we were to do a quick contour drawing of the same object on top of the wash study, either aligning the two studies or offsetting them.
I was unhappy with my first efforts. There was no energy to them. They were more like drawings that had been filled in with wash, like a child's colouring within the lines.

So I took a looser approach and repeated the exercise, disregarding the matching of the two sketches and going for something of an offset effect. 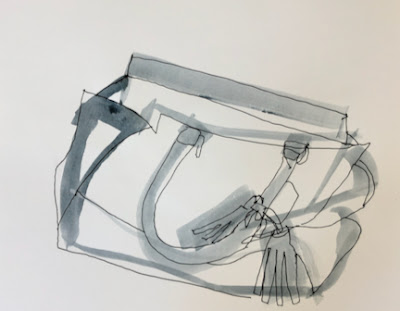 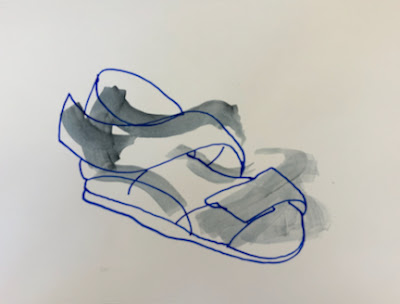 Could still stand to loosen up a bit more. Perhaps a floral arrangement, a more organic subject?
I'm beginning to see how having a regular sketchbook practice would be a good way to generate ideas for further development.
Posted by Heather Dubreuil at 11:39 AM No comments: