One of the top sites to visit in Copenhagen is the Design Museum, and one of its best exhibits is the one devoted to the design of the chair. 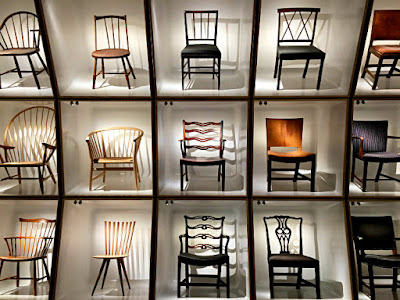 The Danish famously love porcelain and lights but when it comes to chairs, design becomes an obsession. A special section in the museum thus deals with the Danish Chair and the interplay with international chair designs.

The highlight of this display is a tunnel of 110 chairs, which is arguably the most popular part of the museum. Here, each chair is displayed in a single frame like a piece of art. (Many of these chairs are still being produced and priced as if a unique work of art.)
To quote architect and designer Mies van der Rohe,

"The chair is a very difficult object. Everyone who has ever tried to make one knows that. There are endless possibilities and problems – the chair has to be light, it has to be strong, it has to be comfortable. It is almost easier to build a skyscraper than a chair." 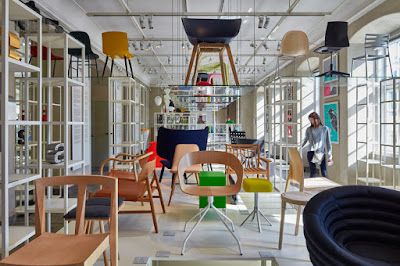 Here are some notes from the museum's display:

The chair is the acid test of designers and one of the favourite objects of design historians. The design brief is simple enough: a structure that can support a body about 42 cm above the ground.

In 1949, in Designmuseum Danmark, the furniture designer Hans J. Wegner presented the chair, which American journalists were to dub The Chair. It became the symbol of a giant Danish export adventure and a national brand known as Danish Design. Wagner, who in his quest for the perfect chair designed more than 500 different ideas for the optimal chair, explained why we constantly need a new chair.

"The chair is the closest thing to a human being. You can give it a personal expression."

Show me your chair and I will tell you who you are.

The chair affects and reflects the body it has to carry, with arms, legs, seat and back. It is anthropomorphic. It invests the person sitting in it with status and identity, and gives the designer power of expression. The chair's function as a container for the body is secondary. The chair is one of the most culture-bearing objects we ever invented. It reveals everything about the age and the society in which it was created.

Chairs are instruments, which give individuals power, authority and dignity. You sit in a particular position or with a particular attitude. Earlier in history, the unnatural static position was reserved for chieftains or divine persons sitting on thrones.

It was not until the advent of democracy in Ancient Greece that the chair became a regular utility item, which had a function other than purely ceremonial. The idea of individual chairs was revived in the Renaissance, and the individualism of the Age of Enlightenment gave rise to countless chairs. In the first half of the 20th century, one could say that the chair was a seating machine: the emphasis was on a chair's function as a container of the body. But in the second half of the 20th century, when the number of chairs soared, everyone got the chair of their choice. The chair became a lifestyle object, which cast the spotlight on the individual.

A chair from a good old family

Denmark became world famous for its many takes on modern chairs in the 20th century. The founder of the Department of Furniture Design at the Royal Danish Academy of Fine Arts, Professor Kaare Klint referred to "a chair from a good old family". What he meant was that a furniture designer should base his/her designs on tried and tested historical types of chairs, then refine and adapt them to the current age. That is why generations of Danish furniture designers have measured, studied, and drawn inspiration from the historic furniture in the Designmuseum Danmark collection.

The Danish Chair shows how modern Danish furniture design can be regarded as one big family with its roots far back in history and foreign cultures. Even though the exhibition places each chair in a frame as an individual and original work, all the chairs are presented in the proximity of close relatives.

I do also remember reading somewhere that the chair is not only used as a power symbol, but also serves to protect and hide and be "intimate" with our more vulnerable, private and delicate bits, thereby making the object more scandalous. Love this museum!