When I'm slogging away in the studio, especially when engaged in less mindful tasks, I often like to keep company with an audiobook. My latest find is The Muralist, by B.A. Shapiro (2015). Shapiro is best-known for The Art Forger (2012). 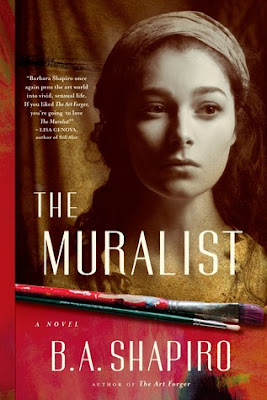 Like many novels of historical fiction, this one shifts between two different protagonists. One of them is a young woman artist, working in the 1930's in New York, employed by the Work Projects Administration. Alizée Benoit, born in France, is part of the Abstract Expressionist movement, friend of Lee Krasner, lover of Mark Rothko, protegée of Eleanor Roosevelt. She is preoccupied with the fate of her extended family, French Jews who are desperate to emigrate to America.

The second main character is her great-niece, Danielle Adams, also an artist, working as a researcher for an auction house in contemporary New York. Danielle wants to find out more about Alizée, about her impact on the development of Abstract Expressionism, and about the mystery of her disappearance. Nothing is known of Alizée's life after 1940, when she was still in her twenties.

So there is much in this book to interest me, including the American art scene of the 30's and 40's, the WPA, and the tragic indifference of so many governments to the plight of refugees from Nazi Germany.

As with Shapiro's "The Art Forger", I found the writing to be competent but not compelling. Much of the drama of the story is inherent in the historical turmoil of the era. The book never becomes more than the sum of its parts. Still, good company in the studio. I listened all the way to the end :-)
Posted by Heather Dubreuil at 12:00 AM