"How Do We Look", by Mary Beard 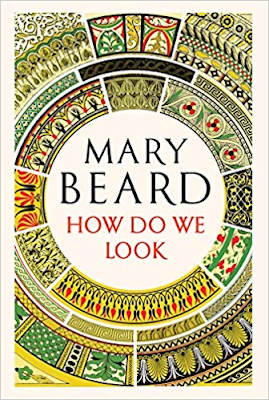 Published in 2018, this book is barely 200 pages long, but it turns the conventions of art history on its head.

Rather than a parade of (mostly male) artists ("one damn genius after another" is the author's phrase), Mary Beard focuses on the "social history" of art. How did the art function in its society? What purpose did it serve? What does it tell us about its time, and how much does it continue to shape our perceptions today? She shifts the focus from the "maker" of the art to the "audience" of the art.

The author readily admits how much she was influenced by Kenneth Clark and his BBC series "Civilization" (1969), but she broadens the conversation by drawing on references from outside the Western canon, including examples from South America, Asia and the Islamic world. She also turns our gaze to include women artists and artisans, and to explore how art reflects (and fails to reflect) the role of women in the world.

Beard is Professor of Classics at the University of Cambridge, a fellow of Newnham College, and Royal Academy of Arts Professor of Ancient Literature. She is the Classics editor of the Times Literary Supplement. Despite all these impressive titles and her obvious erudition, Beard writes in a most accessible style.

If you're interested in the more modern and inclusive take on art history, this would be a good book to begin with.

And here's an interesting footnote: Mary Beard was a co-presenter for the 2018 BBC update of the Kenneth Clark series, newly titled "Civilizations". But when the series was edited for American PBS, much of her footage was removed. Beard claimed that her appearance as an older woman was unwelcome, and that the series was modified to become more "anodyne". She urges anyone interested to watch the BBC version of "Civilizations".
Posted by Heather Dubreuil at 12:00 AM