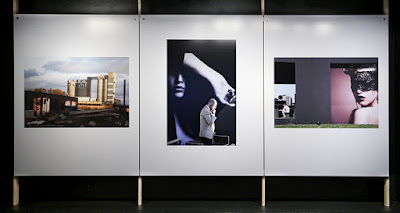 The exhibition Griffintown continues until August 9, 2020.
Posted by Heather Dubreuil at 12:00 AM

You had me at "McCord Museum", a place I've not visited in many years. And "photography". I watched the video and forwarded the link to my photographer daughter for her interest and info. But for me...it was interesting in a different way...it got me thinking about how I see my landscape (very rural) in a different light. What about it captivates me? Why? How? How do I interpret it in fabric, even as a photographer interprets scenes (rural or urban) in film, in print on paper or canvas?

I'm not a particular fan of people who print photos and quilt them -- unless they do something significant, particular, peculiar -- to manipulate the photo so that it is really translated into fabric and stitch and isn't merely a photo that has been quilted.

This fellow's thought process, stimulating mine vis a vis how/why I work the way I do...well, now -- that's of interest to me - and I thank you!

I'm so glad the video struck a chord with you, Margaret. I found it instructive that Walker was so intentional about his composition as he framed his shots.