Born too soon! When I studied for my BFA many years ago, I always tried to submit assignments in fibre whenever possible. This was not always welcomed or understood by some of the teachers. How things have changed!

Last week, four members of our text'art group toured the impressive studio facilities at my alma mater, Concordia, which offers both undergraduate and graduate degrees in "Fibres and Material Practices". We were privileged to be guided by Professor Barbara Layne, whose recent work is in clothing that incorporates wireless and LED technologies and bio-sensing devices.


The university calendar says, "Students are introduced to processes which include silkscreen printing, dyeing, weaving, digital imaging, papermaking, feltmaking, knitting, computer assisted weaving, embellishment, public interventions, sculptural and installation practices. Digital technologies are integrated into the program through digital imaging software and the use of computer assisted textile production systems." Prof. Layne said the courses are so popular that they could easily be filled twice over.

Our group has been lucky enough to visit two other textile schools in Montreal, both associated with the CEGEP de Vieux-Montréal: the CRDITM, which specializes in the design and printing of textiles, and the CTCM, which teaches weaving, knitting, embroidery and computer-assisted design. These programmes are more production-based than the university programs, which include courses in theory, history, and the place of fibre in the contemporary art scene, as well as elective courses in other studio arts (drawing, printmaking, painting, ceramics, etc.)

Do you know what's playing at your local university or college?
Posted by Heather Dubreuil at 12:00 AM No comments: 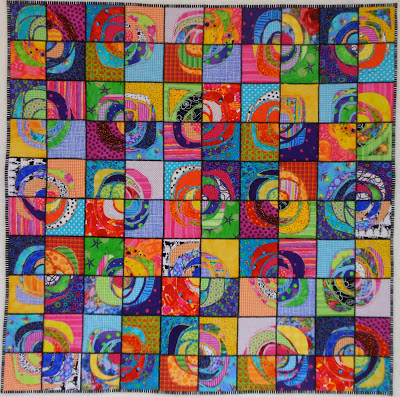 Suffering with left-brain fatigue from all those cityscapes, I have flung myself into making a baby quilt for my cousin's new grandchild.

It was a joy to work with bright colours, bold prints and wonky circles. I used a technique by Beryl Taylor, which is no doubt completely unsuitable for a baby quilt, as it features lots of raw edges. Perhaps as a wallhanging in the nursery? It has been several years since I have ventured to use a traditional binding, and I cringe to think just how much I have forgotten about making one. Another learning experience.

I have a shocking amount of these brightly-coloured cottons stashed away. No doubt there will be more baby quilts to make in the coming years.

Posted by Heather Dubreuil at 10:51 AM No comments:

Art quilts (two or three layers with stitching, say) formed a small part of the work on display at this year's World of Threads Festival.

Of the photos I took, Kit Vincent's works would perhaps qualify as the most obvious representations of this art form. Kit uses hand-dyed cloth and stitch to make abstract, complicated, visually-layered work.

The variation of colour achieved by hand-dyeing adds depth to the imagery. Kit skillfully constructs ghost-like layers of machine stitch, offset from the solid cloth shapes, to create a sense of movement. As the coloured thread moves from a matching background to a contrasting background, transparencies are revealed.


Remarkably, Kit's work appears to be pieced in a traditional way, with no raw edges or evidence of fusing.

Four of Kit's beautiful, highly-coloured works were on display at the Queen Elizabeth Park Community and Cultural Centre, as part of the "Variegated Threads" show.

In the same venue, Micaela Fitzsimmons uses traditional piecing techniques, but introduces paint or ink with printed imagery to add a new element.


Judy Martin had several works in different shows. This piece on the right has some elements of the traditional quilt, including a grid-like visual structure. Additionally, paint, couching, hand-stitching and buttons are used to add layers of visual interest.


Jennie Wood introduces raw-edge appliqué in her take on the art quilt. Also, paint, paper, lutradur and image transfer add to the complexity of the piece at left.


Finally, one of my favourite pieces in the whole Festival, the painterly "Journey" by Susan Strachan Johnson, shows an art quilt that has moved well into the realm of mixed media. Saved from being overly-sweet by some darker overtones, this work employs subtle layering, stitch and found objects to make a poignant statement.

Do you have many small pieces, perhaps made as samples? I saw several works at the World of Threads which may have begun in just this way. I think the way they were grouped for display was very effective.

Above is Joanne Young's "Postcards from the Scrap Heap", on view at the Joshua Creek Heritage Art Centre. Each piece in the coherent group was stitched to a strip of burlap, as shown in the detail shot below.


Dianne Gibson's "Strata" was shown in the wonderful "Pentimento" show, at the O'Connor McLeod Hanna building in Oakville. Each of these cloth squares was wrapped around what appeared to be foam core, then affixed to a square, black ceramic tile. The tiles were mounted on strips in groups of three, and were available for sale as a unit of three, or as a grouping of twelve. Very appealing.

Also in the "Pentimento" show, this work by Maggie Vanderweit is composed of nine smaller squares, stitched together to form a cohesive whole. It is made of cotton and foil, and is both hand- and machine-stitched.

Quoting from the show's posted statement:

"Pentimento is a term used to describe how painters change their ideas during the process of making art, often switching the subject matter and painting over the original idea. The layers of underpainting remain but are hidden beneath the surface.

"Connections artists have taken this theme and built up layers of fibres, thread, stitching, paint, dyes and other materials.Then the surfaces have been altered or peeled away to create a visual erosion. The image behind the colors and textures reveals its own story."

The owners of this building are to be applauded for the way they have opened up the hallways of their office building for the exhibition of local art. They have invested in hanging hardware and lighting to allow for a very professional display, with all the work shown to its best advantage. I think this is a fine way to "humanize" a commercial enterprise, and integrate it into the community.

Posted by Heather Dubreuil at 9:47 AM No comments:

World of Threads: Sculpture and Assemblage 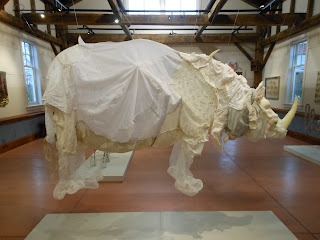 I may never make a piece of sculpture or assemblage, but I was fascinated to see what others can do in this medium when I visited the World of Threads Festival this week in Oakville and Toronto. 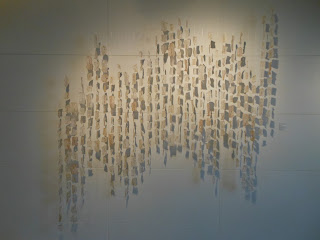 Montrealer Emily Jan constructed "Dürer's Rhinoceros", using resin for the head and repurposed textiles of all kinds for the body. The form was not stuffed, but was made fully dimensional by suspending it at various points from the ceiling. It was shown at the Joshua Creek Heritage Art Centre.


Megan Q. Bostic of Raleigh, North Carolina, had two pieces in the Festival. The piece on the left is titled "The First Year of Grief: Every day never feels like the yesterday I need it to." It took Megan a year to make this, and it is composed of 365 pieces of silk organza, as well as wax, waxed linen thread, powdered drink mix, and tea. Megan made this piece in response to her mother's death. It was part of the Memento Mori exhibit at Sheridan College. 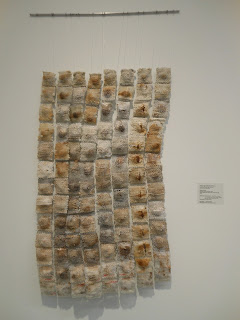 Megan's second piece, "Stale Hope: Too Much Was Never Enough", was displayed at the Quiet Zone show at the Queen Elizabeth Park Community and Cultural Centre.
It is made of dental floss, plastic vinyl, bubble wrap, baby wipes, coffee grounds, twine and aluminum wire. 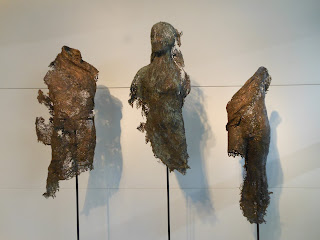 These haunting sculptures are by Camilla Geary-Martin, "Shroud #12", "Shroud #28", and "Shroud #8". They were shown at the Memento Mori show, and are made using a lost wax technique with woven metal.

Alice Vander Vennen had several beautiful assemblages in three shows. She uses copper, upholstery fabric and found objects in her work, assembled with machine stitching. The piece at left is "Totem 4". These pieces are framed and mounted under glass. 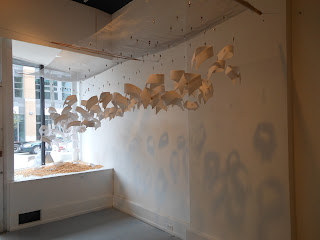 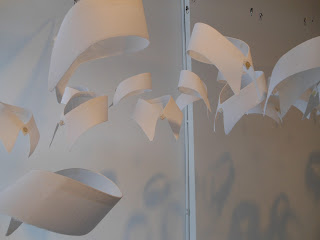 Finally, I was very taken with a work made of stiff white collars. Suspended from the ceiling, they looked like a flock of birds rising from a corn field. Their cast shadows on the white wall added another layer to the experience.

Many other fascinating sculptural pieces are on view at the show, but at some venues photos were not allowed.

Very excited to travel to Oakville and Toronto this coming week, to attend the World of Threads Festival. With 195 artists from 12 countries and shows in 21 venues, this event has been three years in the making. Featured media include sculpture, installation, earth works, quilting, paper work, felting, mixed media, conceptual work, performance and many others.

For almost two years I have enjoyed my subscription to the World of Threads series of weekly artist interviews. The archive of these 83 interviews is a wonderful resource. For those new to fibre art, it is an intriguing glimpse into the infinite possibilities of fibre as a medium.

It's that time of year again, when I sit down and try to come up with a fresh idea for my hand-made Christmas cards. These are little quilts,  measuring 4" x 6", backed with paper, and sent through the mail like post cards, without benefit of protective wrapper or envelope. I like to think of them traveling through the postal system, whether to Tucson or Oxfordshire, bringing a small delight to those handling the mail, and a smile to the recipient.


I use materials that I have on hand, and sometimes I continue with a theme that I'm working on at the time. Because I make two dozen or more, I don't want them to be too complicated.


This year, I began with hand-dyed cotton, and used a stencil with pearlescent acrylic paint for the tree. The cotton was backed with batting before being machine stitched with silver thread to emphasize the lines of the tree. Then I heat-fixed some crystals onto the surface.

I used a heavy watercolour paper for the third layer, and zigzag stitched the perimeter with the silver thread.


They are reasonably stiff, enough to weather their trip, and the paper will easily accept my scribbled greeting and address.

The Tuscan-themed edition of 2011 had no stitching other than the edge finish, but featured image transfer and multiple stamping on hand-painted cotton. I used a heavyweight interfacing for this one: because there was no quilting, there was no advantage to using batting.

The 2010 special was an extension of my Love, Love, Love theme. It had a Victorian feel, complete with antique buttons, pearls and lace and vintage-style photos. This version was a little too thick to pass the test for thinness at the post office, but once it was sheathed in a plastic wrapper, it was a go.

Of course it's too early for seasonal greetings, but it is satisfying to know I have a little stack all made and ready for their journey.