Yes, it looks a lot like Brooklyn #5, but it's four times the size.

Here's my thinking: I produced Brooklyn #5 for the SAQA auction.  I hope it will be bought and loved, and most likely I will never see it again. But I like the image a lot and I need some pieces for my upcoming shows so...

...I made it up in a similar but more saturated palette, to measure 24" x 24". Somehow these colours just suit the subject.

Here's a photo of Brooklyn #5, to compare. This is, in fact, the seventh time I have worked from this image or a detail from it.


Hey, remember Monet and his haystacks.
Posted by Heather Dubreuil at 12:00 AM 2 comments: 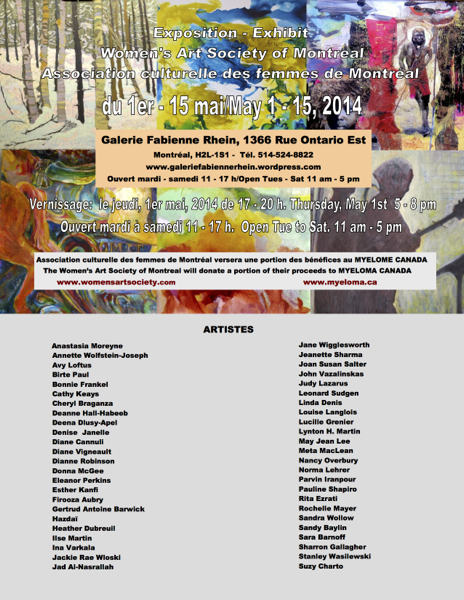 Delighted to participate once again in the annual show of the Women's Art Society of Montreal. Usually held at Ogilvy's Tudor Hall, this year the exhibition will be staged at Galerie Fabienne Rhein, 1366 Ontario Street East. Dates are May 1 - 15, with a vernissage on Thursday, May 1, from 5 - 8 p.m. Works in a variety of media will be on display, but because of space limitations, only one per artist.

Breaking news: my piece took third prize in the show, with a small cash award. Yay! The piece in the show is shown below.

One of my favourite Canadian artists is having a retrospective loan exhibition at Galerie Eric Klinkhoff in Montreal, April 26 - May 10, 2014. You can see the whole exhibit on line, but of course it's nothing like seeing the real thing.

Molly Lamb Bobak was best known for her vibrant paintings of public events and street scenes.

The catalogue of the show describes them as having "staccato brushstrokes, etching movement onto the canvas with quick dabs, creating an astoundingly simple yet complex composition."

Her paintings of flowers "speak of an astounding maturity in the handling of the medium, and of a singular talent." The catalog adds, "She worked magic with oils and watercolours."

Molly Lamb was born in Vancouver in 1920, into an unconventional family. Her father was an art critic and collector, and painters like A.Y. Jackson, Frederick Varley, and Arthur Lismer were frequent visitors to her family home in Vancouver.

She studied at the Vancouver School of Art, taught by Jack Shadbolt, and later was the first Canadian woman artist to be sent overseas to document Canada's war effort, in 1945. While in London, she painted with Alex Colville and Bruno Bobak, whom she married on their return to Canada. Their marriage lasted 64 years, until his death in 2012. Molly Lamb Bobak passed away in February of this year, the last surviving member of the 32 official Canadian war artists of World War II.

A member of Montreal's Beaver Hall Group, and elected to the Royal Canadian Academy of Arts in 1973, she is among the first generation of Canadian women artists to work professionally and to earn a living from her art.

It isn't often that such an exceptional exhibit of art tapestries is staged on the West Island. The show is being held at Viva Vida Gallery, 278 Lakeshore Road in Pointe Claire Village, until May 1.


Louise Lemieux Bérubé is well known in Quebec for her exquisite work in fibre, and is perhaps Canada's premier tapestry maker. She uses her own digital images and a computer-driven jacquard loom to produce large works in gray-scale. Different stitches are used with a dark and a light thread to create a full range of values. Interestingly, the reverse of the tapestry is like a negative of the front.

Recently, Berubé has painted dye onto her finished weavings to introduce colour.


The show, titled "Dance, Photography and Textile" features a dozen or so large works, perhaps 5 to 10 feet in any one dimension. Some of the pieces are made from several vertical panels.


Thank you to Lauma for bringing our Text-art group to see the show. Lauma organized a tour of textile art venues for us this week, and included a visit to the Centre des Textiles Contemporains de Montréal, where Bérubé was the director for over 20 years. While there, we were able to talk to one of the students about this technique, and to see a sample of the stitching produced by the jacquard loom.

For anyone interested in contemporary textile art, this show is a not-to-be-missed opportunity. A Meet the Artist event is planned for Saturday, April 26, 10:30 - 11:30 a.m.
Posted by Heather Dubreuil at 12:00 AM No comments:

My friend John Vazalinskas has invited me to stage a two-person show with him this fall.

John is a talented and versatile painter, who works en plein air and in the studio. His subjects include both rural and urban landscape.

John's idea was that as the focal point of our publicity, we should each produce a 24" x 24" work inspired by the same scene, and that we should choose a distinctively Montreal subject. John is full of good ideas.

We spent a few hours in Old Montreal and the area around the port, to see if we could find a subject that appealed to us both.  John graciously conceded to my first choice, a subject I had captured once before as a simple line drawing.

I have to say I had some trouble choosing my colours and values for this piece. I found a wonderful hand-dyed sky in my stash, and somehow its naturalistic palette inhibited me when choosing the bolder colours I wanted for the buildings themselves. Many hand-dyed bits were swapped in and out as I auditioned them for their roles.

I may revisit this composition, but will have to let some time pass before I can see it with fresh eyes.  For now, Rue du Saint Sacrement will be tucked away, waiting for its debut.
Posted by Heather Dubreuil at 12:00 AM 2 comments:

Had a message from a friend recently. She wanted to know if I had a 4" x 6" piece tucked away in my collection, preferably with a maritime theme, preferably featuring the colour teal.

But then I remembered a photo I took during a trip to Amsterdam, and how I had always thought the image was worth working up into a finished piece.

So, a few hours later, the fibre postcard was finished and on its way by mail to a very appreciative collector. I used arashi-dyed cotton for the water.

As an example of synchronicity, this flyer appeared in my in-box the next day. It features a watercolour painting by Mary S. Martin on its cover.
Posted by Heather Dubreuil at 12:00 AM 3 comments:

Two-minute tutorials from the Met 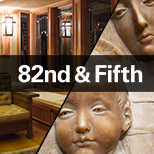 Don't have the chance to visit the Metropolitan Museum of Art in New York City?

Last year, 100 curators from the Museum were asked to talk about 100 works of art that changed the way they see the world.

Click here to sample the two-minute videos.
Posted by Heather Dubreuil at 6:25 AM 2 comments:

Recently Martha Sielman, executive director of SAQA (Studio Art Quilt Associates) put out a call to members. She is crafting a presentation on Creativity, which she will present at the British Festival of Quilts this summer. She intends to sample a number of artists about their sources of creative ideas.

In drafting my response to her, I had to think about how I use my photos of urban landscape as source material for compositions. What is it that makes one image compelling, and another not? It was a challenge for me to articulate what elements I look for in an image.

My choices are, of course, highly individual and intuitive. I like the suggestion of volume, of three-dimensional shape. I like to indicate the form of the buildings with different values of colour, or with cool/warm contrasts. When I traveled to Amsterdam I fully expected that I would capture some wonderful images, but the street scenes there are mostly flat facades. And when I visited Santa Fe, I was disappointed that I just couldn't find the "right" kind of views. Still not sure why.

Negative space is important too. What kind of shape is made by the sky?  I like a sky that is punctuated with chimney pots, aerials, or water towers, something that “hooks” the sky to the buildings below, that makes the sky more interesting.

Sometimes I like to look for an unusual point of view, whether it’s from an upper floor of an adjacent building or simply looking up at a tall skyscraper from the sidewalk.

Other aspects that appeal to me are strong diagonals, the rhythmic patterns of windows, and contrasts of old and new, or round and rectangular.


Other artists that Seilman discusses will no doubt have very different sources of inspiration, including perhaps nature, music, emotions, and even the materials themselves. What sparks your creativity?

I find potential in my urban images, some more than others, and thinking about what makes the difference gives me insight into my process. This might just make me better at choosing subjects to photograph and surer at editing the results.
Posted by Heather Dubreuil at 12:00 AM 1 comment:

So pleased to participate once again in the annual spring show of the Hudson Artists, April 11 - 13, where eight of my recent Cityscapes will be on display. With thirty-seven local artists and more than 200 works on view, there will surely be something to catch your eye. A tea room is available and a painting by John Vazalinskas will be raffled to raise funds for NOVA, our community home nursing service.

I'm planning to be at the vernissage on Friday evening, April 11, from 7:30 - 9, and also will be working the sales desk on Sunday morning, April 13. Hope to see you there! 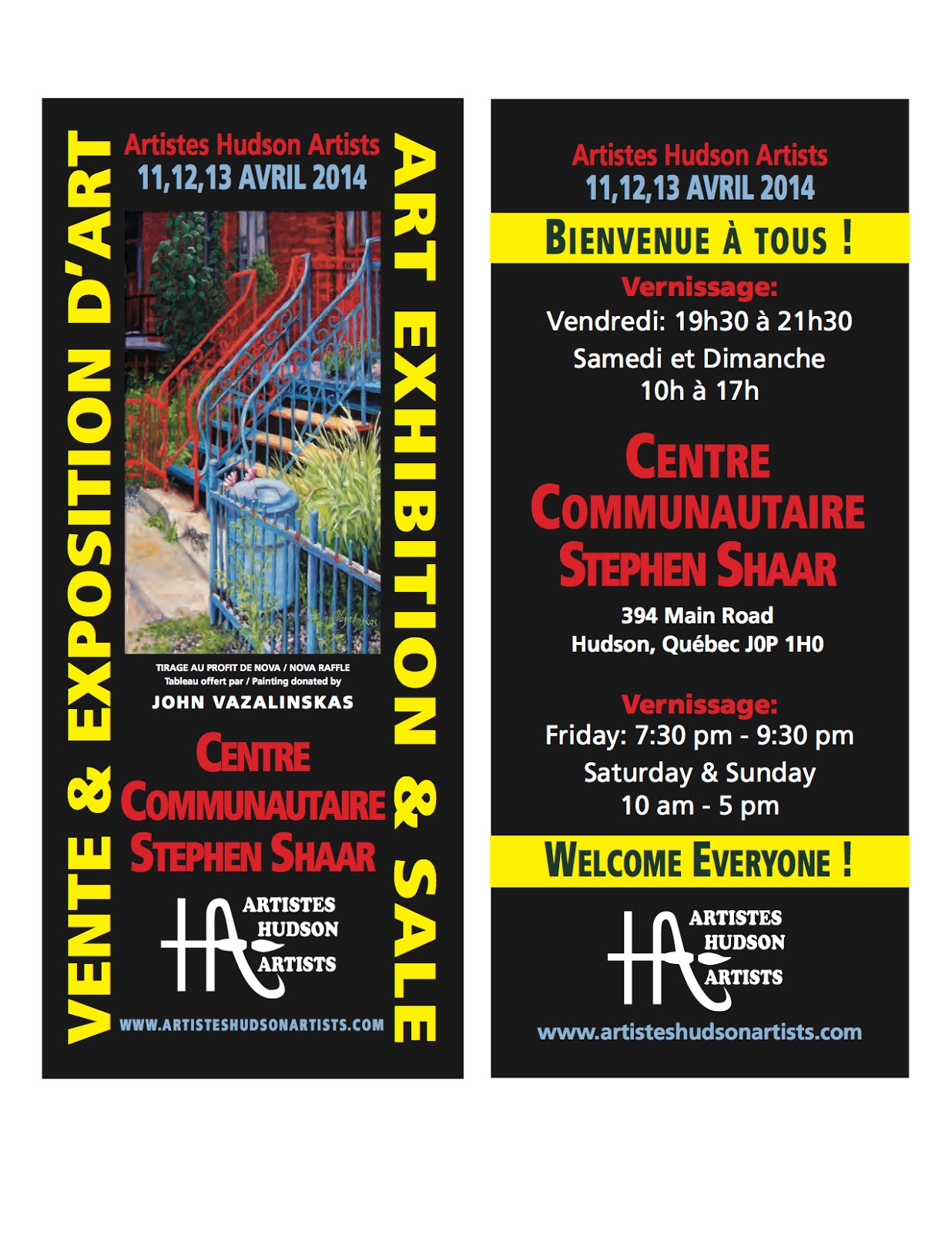