Thanks to Lauma, my talented photographer friend and fellow Text'art member, here is a photo of the piece I have finished for an upcoming group show. Each of the six members of Text'art has produced a fibre piece measuring 36" x 24", inspired by artifacts on view at McGill University's Maude Abbott Medical Museum.


My artist statement for this piece reads:

"The beauty of a tool is in its design, honed over the centuries. Adjunct to the hand of the user, its unique, elegant shape is defined by its special purpose.

The laying out of the surgical tray is a ritual, a tradition, a prelude to the sacrament of cutting into the body.

My piece is inspired by this order, and by the careful archiving of the Maude Abbott collection, with its specimens neatly arranged and labelled. Beyond that, it imagines the wondrous textures and systems revealed by the surgeon's knife.

An exhibition of these pieces will be staged in the entrance hall of the William Osler Library, May 14 - June 15, 2018. An official reception is planned for 5:30 pm, Thursday, May 17. The library's regular hours are 9 am - 5 pm, Monday - Friday.  You can find the location on this map.

More information about the show will be available on the library's website.
Posted by Heather Dubreuil at 12:00 AM No comments:

Email ThisBlogThis!Share to TwitterShare to FacebookShare to Pinterest
Labels: museum, my shows


A recent article in Canadian Art proposes that a little-known woman painter, Florence McGillivray, was a major influence on Tom Thomson and the Group of Seven.

McGillivray (1864-1938) was born in Whitby, Ontario and later lived in Toronto and Ottawa. She studied with Matisse in France in 1913, but her experience in Europe was cut short by the outbreak of World War I. She had a close relationship with Tom Thomson, often visiting his wilderness camps and painting alongside him. She is even said to have mentored him, sharing what she had learned during her European studies.

The first major survey of her work will be staged at the McMichael Canadian Art Collection in 2020.
Posted by Heather Dubreuil at 12:00 AM No comments: 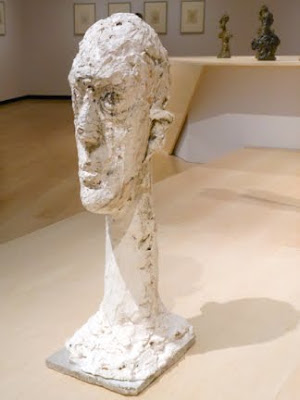 Recently I travelled to Quebec City, to the Musée National des Beaux-Arts du Québec, to see the exhibition on Alberto Giacometti, (1901 - 1966).

The museum's website has an excellent description of the show, which includes more than 230 objects, including 110 sculptures and 50 paintings. An informative biographical timeline greets the visitor at the entrance, and detailed explanations posted on the wall guide us through the various periods of Giacometti's art. Visitors are offered tablet guides with audio and supplementary images. 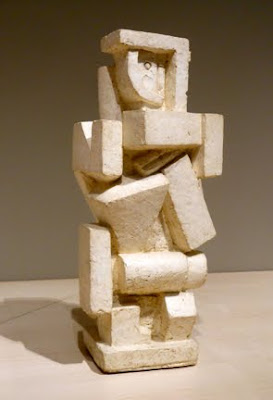 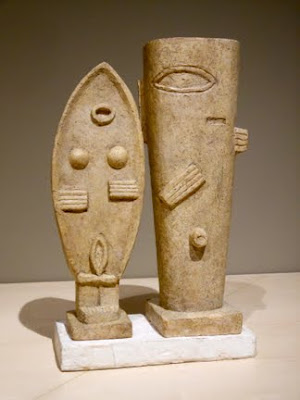 The earliest work we see is a painted self-portrait of Giacometti. Before the age of 30 he had moved from painting to sculpture. The influence of African and Egyptian art is evident in Giacometti's early sculpture, done in a Cubist style, but within a few years one can see him working with Surrealist themes.

In the 1930's, Giacometti experienced a crisis following the death of his father that led him to reject Surrealism and return to representational work. This shift resulted in his expulsion from his group of artist friends, and he began to associate with existentialists, including Jean-Paul Sartre and Simone de Beauvoir. 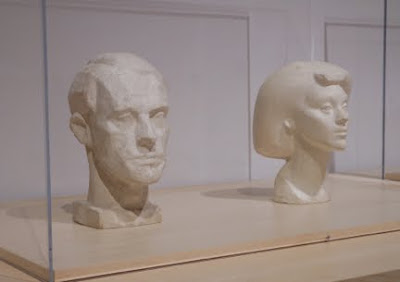 Scale was something that Giacometti experimented with during the 1940's. One of his full figures measures less than an inch tall. He explained that by working very small, it was as though his subject was far away, and only the most salient features of face and posture were observable. In other words, he was getting to the subject's essence. 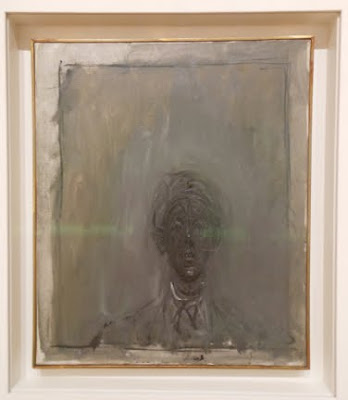 Giacometti did return to painting, especially portraiture. He worked exclusively with a neutral palette, and was known to spend months on a single subject.

This illuminating survey of Giacometti's life work continues at the Musée until May 13, 2018. It will be followed by a solo show of the French Impressionist Berthe Morisot, June 21, 2018 - September 23. I'm hoping to see that show, and will time my visit to coincide with another show at the MNBAQ, Fait Main / Hand Made, which will explore the contemporary trend of art based on artisanal processes and a mastery of the material. This second show will run from June 14 - September 3. 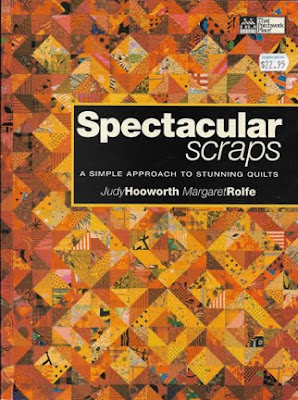 Sometimes it's satisfying to get my teeth into a traditional quilt project. I've taken my inspiration for a baby quilt from Spectacular Scraps, by Judy Hooworth and Margaret Rolfe. 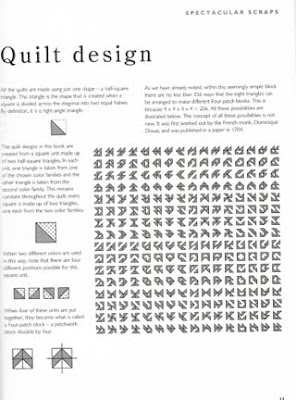 The projects in the book are based exclusively on the half-square triangle. The authors suggest choosing two colours to use in all the squares, and then creating blocks of four squares in one or two of 256 arrangements, as diagrammed above. The book gives advice about how to cut and sew the half-square triangles, and how to choose colours.

Here's a baby quilt I made in 2016 from the same book. In this case I worked with many different greens and pinks, and a single block for the design. 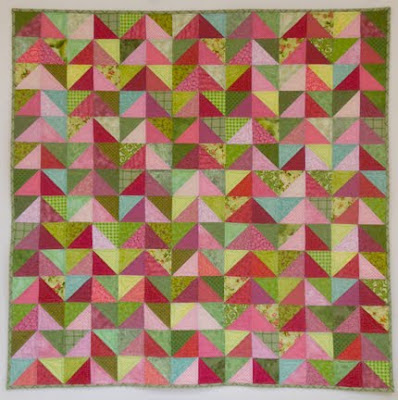 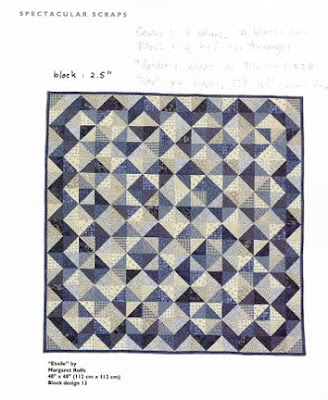 Above is the design I've chosen to work with this time. Instead of limiting myself to two colours (blue and cream are used in the model), I'm sorting my scraps into darks and lights. It's satisfying to use up what I already have on hand. Sometimes I can use one fabric as a dark, and then use the flip side as a light. My palette has been inspired by the wallpaper chosen for the baby's nursery, a large floral with greys, browns and beiges on an ivory background.

There are times in the making of a traditional quilt when the workspace is disorderly. Here's the pile of cottons after I've had my way with my scraps. 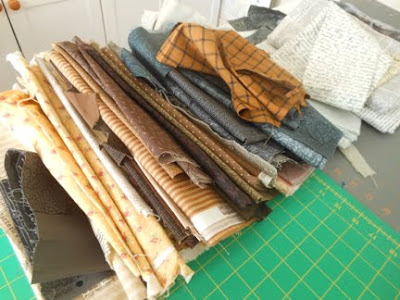 But most of the time I try to get the work done in an efficient and methodical way. For example, here is a tray of half-square triangle pairs, ready to be stitched together, one dark to one light. Consistency in measurement is important. 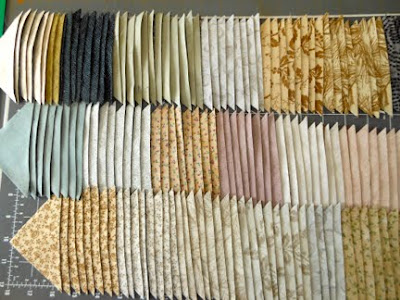 I use my sewing machine to chain stitch one triangle to another, creating long strings of triangular banners that I can easily transport to the ironing board for a good pressing.


And here are all those squares up on my design wall. This is the time to ensure that the various colours and prints are well distributed throughout. You'll see that I've introduced a little pink into the mix, just to add a bit of oomph. And there are tiny bits of colour (green, red, blue) in some of the prints, to add some interest.


It's quite a challenge to move the individual blocks to the sewing machine, keeping all in order, and having all the triangles in the correct orientation. I like to listen to an audiobook or a podcast when doing this kind of work, which manages to be mindless while at the same time requiring focussed attention.

Once the top is pieced and quilted, I will be sure to post the finished baby quilt here.

Posted by Heather Dubreuil at 12:00 AM 3 comments:

Email ThisBlogThis!Share to TwitterShare to FacebookShare to Pinterest
Labels: books, work in progress

Quilts as Tools for Resistance: Hyperallergic

Sometimes the general viewing public is surprised that quilts can carry a political message, when in fact quilting has a long history of voicing political and social concerns.

This recent article on Hyperallergic.com surveys the many quilts displayed at QuiltCon 2018 (Pasadena, California, late February) that convey messages of political activism. 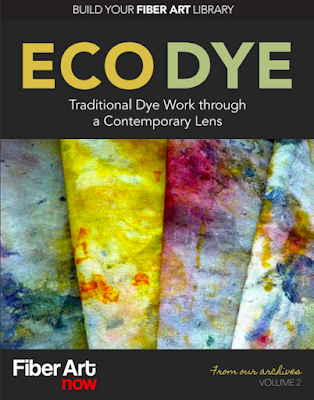 As a subscriber to Fiber Art Now, I was delighted to access their complementary e-book on the exciting topic of eco-dyeing. Now I am sharing it with you!

Perfectly-timed with our anticipation of spring and more time spent outdoors, environmentally-friendly dyeing can be achieved using plant material and simple techniques. The book also includes inspiration and how-to on rust dyeing. Eco-dyeing can lead to fun projects with children (Easter eggs, perhaps?) to intriguing wearables, or to the most sophisticated of gallery installations. The approach can be used with papers as well as cloth.

The e-book is available here. Consider it a taster for what could well become an obsession. 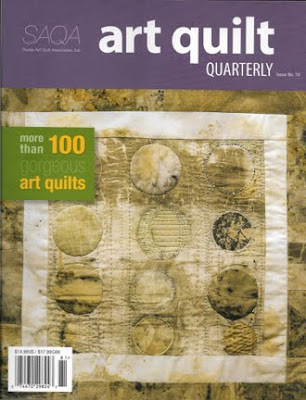 Delighted to have a piece included in the latest issue of Art Quilt Quarterly. This journal is produced by SAQA (Studio Art Quilt Associates) and is aimed at collectors of art quilts, museum curators, and professional art quilters.

You can find out more about this publication here.
Posted by Heather Dubreuil at 12:00 AM 2 comments:

Our textile art group has committed to put together a show of six works, each one inspired by a different aspect of the Maude Abbott Medical Museum collection. I have blogged about this project a few times in the last couple of months.

My piece is inspired by the museum's surgical instruments. It is essentially a quilt that will be stretched over a canvas, 36" x 24". A bit like a sampler, a bit like a patchwork, it is composed of 17 different elements.

Some of the elements depict the surgical instruments themselves. A surgical tray typically has multiple scalpels, clamps, needle drivers and scissors laid out neatly, and I have referred to this presentation in my piece.


Other instruments are depicted with photo transfer directly onto hand-dyed cotton. 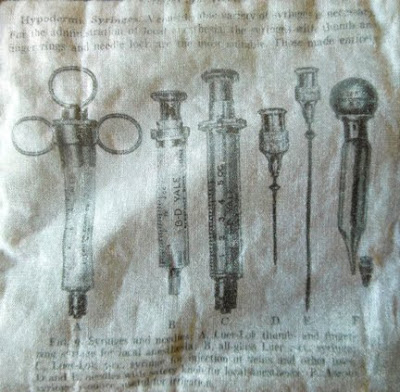 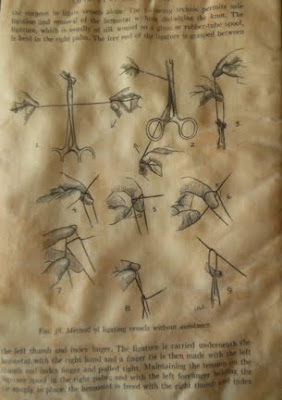 I have used my imagination for other elements in the project. They resemble images one might see looking under a microscope, and evoke cellular growth: perhaps healthy tissue, perhaps pathology, but all utterly imaginary.

Cloth and Stitch: Inspired by the Maude Abbott Collection will be installed at the entrance to the William Osler Library, McGill University, and will run from mid-May to mid-June. I will be sure to post here as the date approaches.

Meanwhile, there is much to be done to document the show: bios, photos and artist statements for each artist, a brief history of Text'art and an intro to the exhibition itself. The Museum will produce a booklet and a poster for the show, and promote it throughout the McGill community, and several weeks of lead time are needed for this.  Putting this together has been a new experience for our group of six artists and we have every intention of rising to the challenge!
Posted by Heather Dubreuil at 12:00 AM No comments: