Delighted to have two large cityscapes selected for the annual Art Rental Collection at Pointe Claire's Stewart Hall. They will be on display in the gallery from October 31 to November 29, and then available for sale/rental for a full year. Images of the whole collection will soon be posted on-line.

This will be my sixth consecutive year in this show, and it is always gratifying to be included. I find it satisfying to see my work hung in a real gallery with good lighting, especially with juried work in a variety of mediums.

Do consider attending the official opening on Sunday, November 1, from 2 - 4:30 pm.

The Gallery is located at 176 Bord-du-Lac, in Pointe Claire.
Posted by Heather Dubreuil at 12:00 AM 1 comment:

Email ThisBlogThis!Share to TwitterShare to FacebookShare to Pinterest
Labels: Cityscape, my shows

The Rape of Europa, by Lynn H. Nicholas 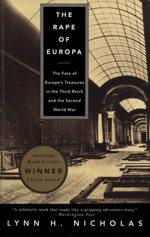 Having seen the films The Man Who Saved the Louvre, The Monuments Men and The Woman in Gold, and having read The Lady in Gold, I decided it was time to dig in and read the authoritative book on the subject of the Nazi plunder of art during the second World War.

The Rape of Europa by Lynn H. Nicholas was published twenty years ago, and the author was awarded the French Légion d'Honneur for her work, as well as the National Book Critics Circle Award for non-fiction.

The book jacket does an admirable job of "selling" the story:


"The cast of characters includes Adolf Hitler and Hermann Goering, Gertrude Stein and Marc Chagall - not to mention works by artists from Leonardo da Vinci to Pablo Picasso. And the story told in this superbly researched and suspenseful book is that of the Third Reich's war on European culture and the Allies' desperate effort to preserve it.

"From the Nazi purges of 'Degenerate Art' and Goering's shopping sprees in occupied Paris to the perilous journey of the Mona Lisa from Paris (while bridges exploded in its wake) and the painstaking reclamation of the priceless treasures of liberated Italy, The Rape of Europa is a sweeping narrative of greed, philistinism, and heroism that combines superlative scholarship with the breakneck pace of a thriller." 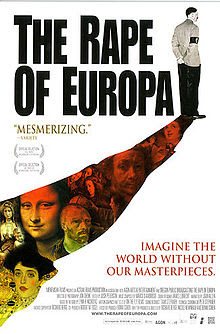 The book is challenging, and includes 53 pages of notes, bibliography and index, so it is not for the casual reader. But the story is a compelling one, and is particularly relevant to art lovers and to those travellers who seek out European art treasures. I began this book while in southern France, and was fascinated by the real-life stories of intrigue and sabotage that related directly to the area, revealing a gritty historical dimension rarely mentioned in travel guide books.

And of course the story continues, with today's headlines of recovered paintings and unearthed caches of gold.

If you're interested in this subject, the 2006 award-winning documentary film based on the book might be a good place to start.

The Beaver Hall Group exhibition at the MMFA

Montrealers are excited about the upcoming opening of 1920s Modernism in Montreal: The Beaver Hall Group, running October 24, 2015 to January 31, 2016.


"The first major study of this subject, this exhibition will shed new light on the association of artists whose works imbued artistic life in 1920s Montreal and Canada with a certain colour: it offered one the most original expressions of pictorial modernism in the country. In a sense, these artists were to Montreal what the Group of Seven was to Toronto. But rather than offering an image of Canada’s identity through the depiction of untamed landscapes, they showed their attachment – and applied a modern touch – to the portrait and to humanized cityscapes and landscapes."

What's unique about this group of painters is that women were so well-represented, at times forming the majority of the members.

The exhibit will be staged at the Montreal Museum of Fine Arts, and will be complemented with gallery tours, films and lectures. For more information, go to the What's On page of the museum's website.

And coinciding with this exhibit, the Alan Klinkhoff Gallery, 1448 Sherbrooke St. West, will have a show and sale of paintings from the Beaver Hall group until October 31. Go to their website to see images of the paintings and to read the accompanying catalog.
Posted by Heather Dubreuil at 12:00 AM No comments:

G.Scott MacLeod is a 50-year-old Montreal artist-activist who grew up across the street from me in Hudson, QC. His media include painting, drawing, music and film-making. Until August 2016, MacLeod's work Dans L'Griff is on display at the Centre d'Histoire de Montréal in Place d'Youville.

The exhibit tells the story of Griffintown, its past, present and future. MacLeod uses his small sketches in graphite or coloured pencil on Mylar to illustrate 20 or so landmarks of the Montreal neighbourhood. Videos of the sketches in progress give us a sense of how the artist works, and the landmarks are located on a large map for easy reference. The visitor is taken on a tour of some of the landmarks, with several video stations featuring narrative about the significance and history of the various sites.

Through photographs and film, we gain an understanding of the sense of community that made Griffintown so special in the past, the forces that led to its decline and the issues around its current rebirth. The Mercier family, mother, father and son, who grew up in the Irish-settled neighbourhood share their memories of daily life and their concerns about the choices that Montreal is now making in its redevelopment. At this point, it is predicted that the population will quickly grow by 20 - 30,000, and yet there are no plans for a school or green space that help give social cohesion to a community.

MacLeod's process is represented by a replica of his workspace, with his drawing tools and reference photos on display. Visitors are invited to share their thoughts by completing postcards at his desk and posting them.

Though not well-known, this museum is worth a visit, for this exhibit and others. The building itself, a former fire station, has many interesting architectural aspects, including a glassed walkway that affords an elevated view of the area. Allow at least an hour to enjoy Dans L'Griff.


Montrealers, did you know that McGill University has more than 2000 pieces in its art collection, including paintings, sculpture, installations, prints, murals, stained glass and tapestries? There is no single location for these holdings: they are scattered over the many buildings at the downtown site, Macdonald Campus and the Galt Estate. They are in conference rooms, offices, libraries, hallways and staircases. Some of the sculpture is located permanently outdoors.


Only three years ago McGill created the position of Director for its collection, hiring Gwendolyn Owens in 2012. Her first task was to do an inventory, which has since been repeated and is to be done every two years. This first survey located the art and determined its condition. All works were documented and some were set aside for cleaning or restoration.

At any one time, about one-eighth of the collection is in storage, but these items are constantly changing, as buildings undergo renovation and as staff decide to exchange a piece for something new.


Quebec law requires that when a publicly-funded building project is undertaken, one percent of the budget must be devoted to art, whether in the form of an acquisition or an event. The collection also grows through bequests. Should anything from the collection be sold, or "deaccessioned", the proceeds must be used to fund the care of the collection, or to buy more art.

Owens has said that one of the highlights in her tenure as Director of the VAC has been the assembly of many of the works for a one-time fundraiser to support cancer research. Some 300 donors were treated to a private showing in the Bellini Building.


Not only does the collection bring pleasure to staff and students, it is also used as a basis for studies in art conservation and cataloguing.

The VAC is not yet available as an on-line data base, but you can learn more about it by going to its website.
Posted by Heather Dubreuil at 12:00 AM No comments: 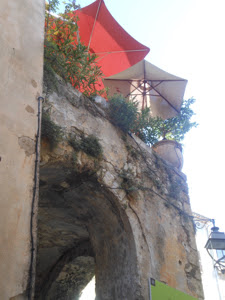 All these photos were taken by Looking Up in the medieval hilltop town of St.-Paul-de-Vence, France. 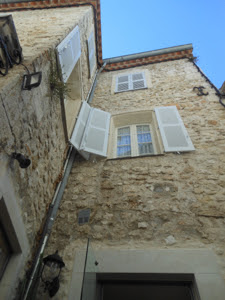 I think many of them have the makings of a good "start" for a composition. 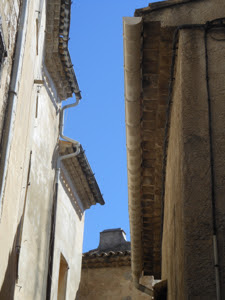 In many of them, the sky forms an interesting negative space. 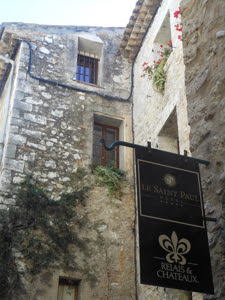 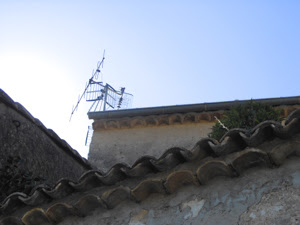 Others have a variety of line: straight, wavy, broken, delicate, broad. 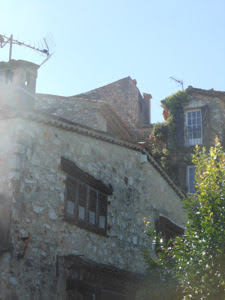 In some there is a pleasing variety of shapes: small, medium and large. 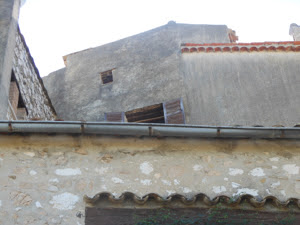 And some offer marked contrast between light and dark.

I hope to work with some of these images as source material in the weeks to come.

Email ThisBlogThis!Share to TwitterShare to FacebookShare to Pinterest
Labels: inspiration 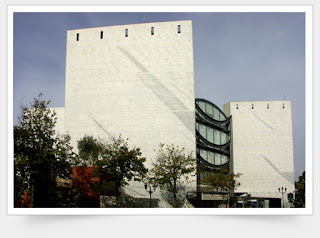 One of the best things about the Musée d'Art Moderne et d'Art Contemporain in Nice is its architecture.

Visitors flock to the rooftop walkway, which affords a wonderful 360° vista of the city. Note that it would be very difficult to access with a stroller or wheelchair. 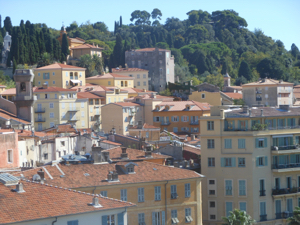 Here are just a couple of the photos I took while on the rooftop. 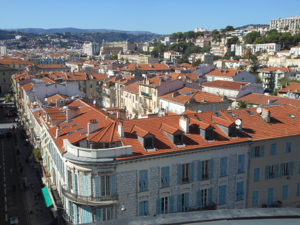 Yves Klein is a favourite son of Nice, and a good part of the display space is devoted to his work. But my eye was taken with this "shaped canvas" by Tom Wesselmann, who had a major show at the Musée des Beaux-Arts in Montreal a couple of years ago. 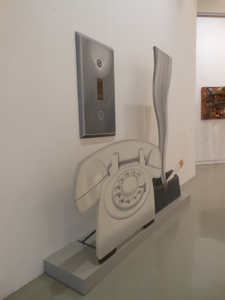 Robert Rauschenberg is one of my favourite modern artists.

I like the way he used found materials, including textiles, pushing the limit as to what constituted "acceptable" media in fine art.

French artist Niki de Saint Phalle is given a lot of exhibition space as well. As with Yves Klein, there is much biographical information on display, along with many photos of the artist at work and with family and friends.

And what would any collection of modern art be without an Andy Warhol or two?

The MAMAC was an interesting destination for an art enthusiast in Nice, but the building itself, with its welcoming entrance and its generous spaces and lighting, was as much an attraction for me as the art on display. 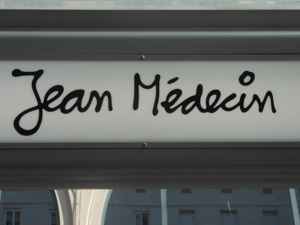 One of the first things I noticed when visiting Nice this September was the light-hearted font used to identify the tramway stops. 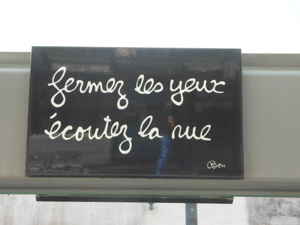 I learned later that the script is that of Niçois artist Ben Vautier, known as Ben and now 80 years old. His work is in the collection of the Musée d'Art Moderne et d'Art Contemporain in Nice. Among his many causes, Ben is a champion of the Occitan language. 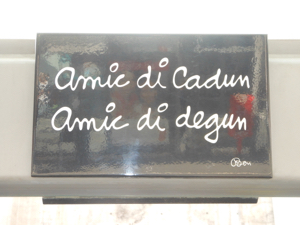 The transit company has posted little phrases attributed to Ben on its tramway shelters. Some of them I could understand, but others may be in Occitan, a relative of Catalan.


Then I saw an exhibition of paintings by Raoul Dufy at Nice's Musée des Beaux-Arts, specifically his paintings of the Promenade des Anglais which borders the coast of the Baie des Anges in Nice.

What are these but line drawings superimposed on coloured shapes? And notice the quality of line: casual, approximate, playful.


The Musée Matisse in Nice has many of
Henri Matisse's very beautiful drawings, which show a similar quality of line: light, exuberant, expressive. 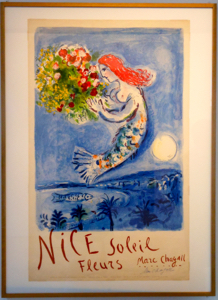 Even this poster advertising Nice, featuring La Baie des Anges by Marc Chagall, uses a script with a similar flavour.

For about 150 years, Nice has marketed itself as an international playground. Whatever darker issues Nice must deal with (the legacy of colonialism, immigration, unemployment) its "brand" is effectively established as being "fun in the sun".

And wouldn't it be fun to use a loose, sketchy line when working with my images from the Cote d'Azur?