“Art & Fear: Observations on the Perils (and Rewards) of Artmaking”,
written by David Bayles and Ted Orland, 1993, 122 pages
published by The Image Continuum Press

This is a slim, dense, insightful volume that I have read and re-read many times.  It was recommended to me by Dianne S. Hire, when I took her workshop many years ago. The authors are practicing artists and teachers who deal with the self-doubts that happen to each of us in the making (and especially in the not-making) of our art.

Almost every page has a nugget that calls out to be highlighted, and on each re-reading, I have been struck by some different observation.  The authors embed their text with examples from different media, and enliven the book with pithy examples ranging from cave artists to Mozart to the Plains Indians.

Topics include a discussion of art vs. craft; the values and pitfalls of university art education for both teachers and students; and the artist’s need for community vs. the essential solitariness of making art.

A couple of months ago, I completed some small "colour field" paintings and blogged about them. In the last few days I have realized more colour studies, but this time in a miniature format, and in cloth.

I was looking for a gift for a fibre-friend, and it was suggested that I stitch together hand-dyed cotton into simple designs, making them into coasters.

I limited myself to six colours, and mixed them up into different combinations. Each 4-inch stitched "composition" was layered with a stiff, heavy-weight stabilizer and a final backing of hand-dyed cotton. The sandwich was bound with a dense satin stitch all around the edge.

The finishing touch was to make a gift box to store the eight coasters. I found the instructions to make an origami box and lid on-line. By starting with a 12" square of heavy paper, I was able to craft a box that was just the right size.

A small but satisfying project! I even made a second set:


This year, Heritage Montreal's summer walking tours will focus on select metro stations, celebrating the 50th anniversary of our underground subway system. When built, our subway stations were meant to be a showcase for Quebec design as well as the nexus for our world-famous underground city. The system opened just one year before Expo 67, our World's Fair, and there was a palpable excitement, energy and optimism about showing off our beautiful city.


In past summers I have enjoyed informative architectural walking tours organized by Heritage Montreal, with topics like The Main, Shaughnessy Village, The Golden Square Mile and our heritage hospitals: The Royal Victoria, The Allan Memorial, the Montreal Neurological and Hôtel Dieu. The walks are usually scheduled in the hottest part of the summer, so this year I look forward to exploring these underground sites, protected from heat and rain.

Tours are about two hours long, offered in both English and French, and cost $12 - $15.


Université-de-Montréal and Édouard-Montpetit: New approaches to the campus,

Peel and Bonaventure: Right where the action is,

Champ-de-Mars and Place-d’Armes: A succession of mega-projects,

Acadie and Parc: From industrial crossroads to hubs of student life,

Atwater: Mini-downtown in the west,

Place-des-Arts and Saint-Laurent: At the heart of Montreal arts and culture,

Pie-IX and Viau: New stations for the Olympics,


For more information about the walking tours, visit the Heritage Montreal website. To get an idea of some of the artistic treasures of our underground city, visit the Untapped Cities website or the STM's website. 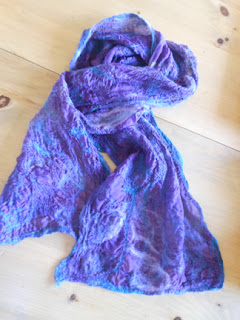 This summer's text'art retreat at Dianne's cottage was a great success. Lauma guided us through the many steps required to make felted scarves, and after several hours we were each rewarded with our own custom-made piece.


Here I am laying down wisps of wool roving onto a chiffon base, being careful to place a line of roving all along the edge. The extra-long length of chiffon was layered onto bubble wrap for this first step. A mild breeze added an unwelcome challenge.

After using water and pressure to secure the wisps onto the first side of chiffon, the whole length was flipped over, ready for the layering of more roving on the second side.

It's always fun to work on a group project at our retreats. Thanks to Dianne for hosting us once again, and to Lauma for so patiently sharing her expertise. Good food, good conversation, and lots of laughter made for another memorable get-together.
Posted by Heather Dubreuil at 12:00 AM 1 comment:

The Triennale Outaouais, August 18 - September 16, is a celebration of fibre that will feature outdoor art installations, indoor exhibitions, films, workshops and lectures.

Many venues will collaborate to stage this event, most located in the Gatineau Hills area north of Ottawa. Check out their website for further information.

Another celebration of fibre, this one with a different orientation, the upcoming Twist Festival runs August 20 - 21, in St.-André-Avellin, a small town in the same general region. This fifth annual iteration of Twist will feature 125 vendors, plus workshops, demos and lectures. Yarn, knitting and weaving feature prominently in this event. Their website gives more details.

Angela Teng is one of fifteen finalists in the RBC Canadian Painting Competition. Her work explores the relationship between art and craft, which I always find interesting. Prize winners will be announced September 20, 2016.

To quote from the magazine Canadian Art,

"Angela Teng has gained attention in the Canadian art realm—and should garner yet more—for her unique approach to the materials and practices of painting. Most notably, Teng crochets “canvases” out of strings of dried paint, inverting expectations around fine art and fine craft. Based in Vancouver, Teng was born in Victoria in 1979 and studied art at Camosun College and Emily Carr University, graduating from the latter in 2011. She is due to have a solo show at Vancouver’s Equinox Gallery later this year, and she has also exhibited at Mixed Greens in New York and Wil Aballe Art Projects in Vancouver, among other venues."

Now, if Teng had used yarn in the same way, and applied it to an aluminum panel, would it still be considered fine art? Is there something inherently superior about using paint for the crocheted rectangle? Intriguing questions are raised by this "painting", don't you think?
Posted by Heather Dubreuil at 12:00 AM 1 comment:

Collage of another kind

This spring I had the pleasure of visiting the National Gallery of Art in Washington DC. Its entire East Building was closed for renovations, but the West Building had much to offer.


Near the exit of the National Gallery's display of American Art is this large and striking painting by George Bellows. You can zoom in on the image by clicking here. Bellows (1882-1925) was a student of Robert Henri and, as a member of the Ashcan School, was best known for his bold paintings of New York City.

"In this painting, which was criticized at the time for being too literal and for its lack of any unifying artistic order, Bellows revealed the frenzied spectacle of the entirely new New York that was emerging in the early twentieth century. Trolleys, elevated trains, motorcars, horsedrawn carriages, and a sea of humanity are snarled in an impossible traffic jam beneath a jumble of imposing skyscrapers and a roiling sky. We are confronted with an urban environment unlike any other, where industry, commerce, and mass culture knew no bounds, and where the natural world, as the forlorn trees in the background suggest, was being crowded out."


Beside Bellows' painting hangs a "chromogenic print" of a collage created as an homage to New York, by Brazilian-American Vik Muniz, born in 1961. It is roughly the same size as the original.


"For more than twenty years, Muniz has recreated works of art using sugar, chocolate, found objects and other items. He copied George Bellows' 1911 painting New York ... by tearing up magazines to make a collage. He then photographed the collage and printed it as a giant enlargement, which gives the edges of the strips of paper a feathery texture. Composing his picture out of pictures of a vast array of things — from bodies, faces and lips to letters, fruit, gears, and even a zipper — Muniz alludes to the image-saturated twenty-first century and also suggests that nothing in this new age is real. It is all artificial — a replica of a replica made out of replicas." 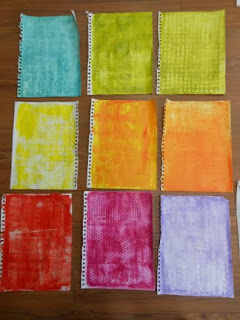 Over the years I have taken mixed-media workshops with Kate Strickland of Hudson, Christina Lovisa of Ottawa, Diane St-Georges of Valleyfield, and Pat Dews from New York. Last year I took an on-line class with Jane Davies, and one of the exercises in that class was the production of a stock of "collage papers". These are useful to have on hand when you just want to add a pop of colour or texture when producing a mixed-media painting. 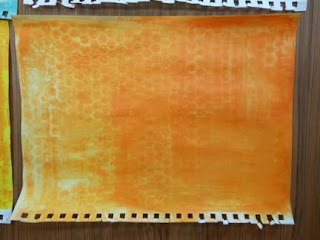 White gesso is applied to drawing paper with a brush or credit card and, while it is still wet, a stamp or stencil is pressed into the gesso to form a texture. Alternatives include bubble wrap, scraping with a comb, or scribbling with a stylus. Once the gesso is dry, paint thinned with glazing medium is applied with a brush or credit card, highlighting the texture. Or you can apply regular-strength paint, wiping it with a wet paper towel to reveal the texture beneath. 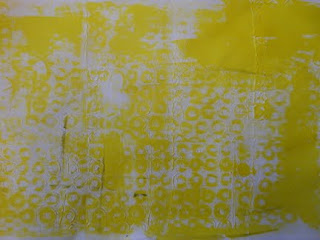 Here's an example of how textured collage paper can be used in a mixed-media painting. This is something I produced last summer in my workshop with Pat Dews.


Another approach is a technique I learned from Diane St-Georges. This involves painting onto semi-transparent "deli paper" and allowing the paint to dry. When the painted deli paper is collaged into a mixed-media work with gel medium, the paper itself becomes transparent, leaving just the painted texture. You can opt to lay down a base layer of white or black paint before applying the texture.

Here are some of the tools I use to produce texture, physical or visual, when making collage papers:

This is a great activity for when you're in between projects. I'll be glad to have this range of collage papers on hand when I take my next workshop with Jane Davies in mid-September.

And finally, here's an example of how snippets of these collage papers can be used to add interest to a mixed-media piece:

A Fold of Chairs

According to several sources, the collective noun for chairs is a "fold". And that's what I saw on a recent visit to the Liliane and David M. Stewart Pavillion of the Montreal Museum of Fine Arts, which focuses on domestic design. Here is a taste of their holdings.

From the "anthropomorphic" section:


From the Italian section:


From the Scandinavian section:

From the American section:

This survey of chairs reminds me of the words "variation within limitation", a phrase used by artists to explain the strategy of working within a series.
Posted by Heather Dubreuil at 12:00 AM 1 comment: