...but first, Canada and Impressionism: New Horizons tours through Munich, Lausanne and Montpelier, before arriving in Ottawa, Fall 2020.

The exhibition features 119 paintings by 36 Canadian artists, dating from 1880 to 1930. The curator, Katerina Atanassova of the National Gallery, aims to introduce European gallery-goers to Canadian Impressionists. Many of these painters studied in France, but returned to Canada and brought an "Impressionist eye" to the landscape of their homeland.


Emily Carr, Prudence Heward, Helen McNichol, Henrietta Mabel May, Sophie Pemberton and Mary Bell Eastlake are among the artists in the show. Says the curator of Kunsthalle Munich, Nerina Santorius, "I am impressed by the artistic production of so many women Impressionist painters. It is amazing to see how early the Canadian institutions – under William Brymner, for instance – opened their classes to women artists."

“Sophie Pemberton became the first woman to win the Prix Julian in 1899. Laura Muntz was accorded the prestigious position of studio head at the Académie Colarossi…. Helen McNicoll was elected a member of the Royal British Academy in 1913,” explains Atanassova. “These women were all trailblazers who defied Victorian conventions by choosing to pursue a professional career as artists.”

It could be said that the first Canadian Impressionist is Frances Jones, whose work, shown below, was exhibited in the Paris Salon of 1883. Her painting was one of the first works depicting a Canadian subject to be shown at the Salon.


Other artists in the show include James W. Morrice, Maurice Cullen, Clarence Gagnon and Lawren Harris, many of whom travelled widely in Canada and abroad and depicted a range of landscapes.

You can read more about the show here.

I've been entangled in domestic maintenance for the last few weeks, but have a few moments now to post some items to this blog.

These pix were taken almost three years ago, and I thought I would share them here. They could be interesting "starts" for a composition in fibre or paint/collage.

Posted by Heather Dubreuil at 8:30 AM 2 comments: 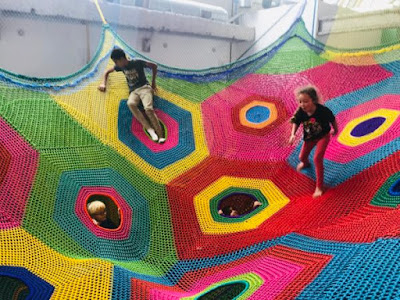 Here's an item I learned about through my subscription to the Fiber Art Network, which recently posted this link about an art installation in the New Children's Museum of San Diego.

"The stunningly colourful 28 by 20-foot, three-dimensional textile structure resembles a giant hammock of crocheted circles, open pockets and hanging pendulums. Within this play-structure, children are able to move upwards through one pocket after another until they reach a vibrant expanse where they can climb, slide, bounce and rest. It’s a one-of-a-kind place to play and interact with others, and the first large-scale work at a museum in the U.S. by internationally renowned textile artist Toshiko Horiuchi MacAdam." 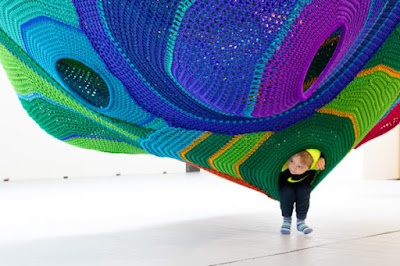 By the numbers:
To quote McAdam, who works out of Bridgetown, Nova Scotia,

"To me, the concept of Whammock! is to connect with others through the waves of vibration in the net.... If a child climbs, jumps or crawls in one place then another child will feel the vibration and respond with their action, and in this way, they are naturally communicating to one another.” She also explains that the name Whammock! comes from the word hammock. “Every culture has a hammock or type of cradle, and Whammock! is a giant one that impacts everyone who plays in it.”