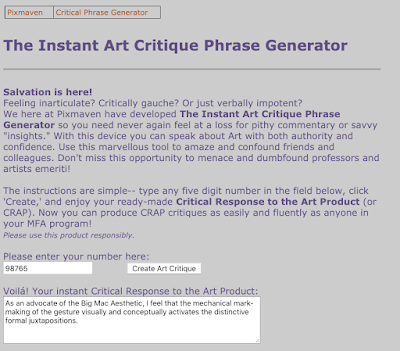 Well, here's a bit of humour to mark the year end. If you go to this site, and enter a random five digits, you will be rewarded with a bit of nonsensical "art-speak". Some sample results:

"It's difficult to enter into this work because of how the internal dynamic of the negative space endangers the devious simplicity of a participation in the critical dialogue of the 90s."

"Umm... the optical suggestions of the spatial relationships seems very disturbing in light of the exploration of montage elements."

"I'm surprised that no one's mentioned yet that the metaphorical resonance of the facture makes resonant the essentially transitional quality."

Mix and match as desired....

For years I have subscribed to The Painter's Keys, an e-newsletter formerly published by Canadian painter Robert Genn and, since his death in 2014, continued by his daughter Sara, also a painter. The newsletter covers a broad range of topics of interest to artists in all media, and to art aficionados. Often an older post is pulled from the files and re-published.

A recent post, originally published in 2005, outlined the criteria that Robert Genn proposed to evaluate a work of art. Occasionally, Genn served as a judge or juror, and he would score the entries using the following "evaluation points":


"If you were to assign a maximum value of 10 to each of these fourteen points, an almost impossible top mark would be 140. Loosely speaking, a total of around 50 is often enough for an “in.” My system doesn’t favour realism over non-objective work, but in my jury duty hard-won realism often wins out with these points."

While I would have trouble distinguishing "artistic flair" from "artistic audacity", I would not argue with the double-weighting of this quality. The vocabulary of the checklist is helpful when I try to articulate my response to a particular work, whether it is my own or other's.

The original article may be found here. The terms are further explained in a subsequent post.
Posted by Heather Dubreuil at 12:00 AM No comments:

Once again this year, I have sent out a couple dozen machine-stitched Christmas cards of my own design.

I painted silver ink onto hand-dyed cotton, using a commercial stencil that I masked with a triangular shape. Machine-stitching with silver metallic thread followed. A red paint marker was used to decorate the tree. The three layers of hand-dye, batting and muslin were backed with watercolour paper and the edge was finished with a narrow zigzag of silver rayon thread.

I get a kick out of sending these through the mail wearing only a stamp, no envelope or protective sleeve.

And, if you're still reading, I hope that your holiday is filled with days both merry and bright!
Posted by Heather Dubreuil at 12:00 AM 1 comment:

27 Artists on the Worst (and Best) Advice Anyone Ever Gave Them...

An article in a recent issue of New York magazine interviews a number of artists who answer the questions,

Answers range from amusing to encouraging to enlightening.
Posted by Heather Dubreuil at 12:00 AM No comments:


Completed just a few days ago, this is #20 in the collection of larger cityscapes to be included in my upcoming museum show. In addition, I will deliver seven smaller urban landscapes, which may also be displayed as space allows.

Fabrics used include a mottled hand-dye for the sky, a range of hand-dyes in neutral colours and, for the terra-cotta-coloured roofs, commercially printed cotton.

The work is inspired by a photo I took while visiting Riga this past summer.

Jerry Saltz: How to be an Artist 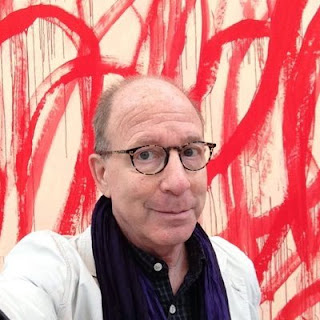 Recently published in New York magazine is a compelling article by Jerry Saltz, a self-described "failed artist". Saltz is a well-known American art critic and columnist, awarded the Pulitzer Prize for Criticism in 2018.

His article is subtitled "33 rules to take you from clueless amateur to generational talent (or at least help you live life a little more creatively)".

I found the article well worth reading, and wanted to share it here.

It's true. I declared to my art friends a year or two ago that I would never make another cityscape.

But now I find myself preparing for a show that requires twenty cityscapes, and I am currently in possession of only 18. (I've been very fortunate to have sold most of the hundred-or-so that I have made over the years.) 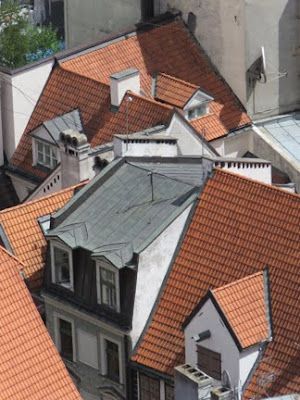 A visit to Latvia this past summer allowed me to take this photo from the top of the Riga cathedral, using a good zoom lens. Thank you, Lauma, for convincing me that I needed a new camera, and then for showing me the sights in this intriguing city.

I am pleased to introduce my most recent cityscape, made of hand-dyed and commercially-printed cotton.

Love those rooflines, the variety of scale, the punch of the reds against the neutrals, the range of value. I think that what I have been learning in painting workshops is reflected in this most recent work in fibre, and I am happy to include it in my upcoming show.

Posted by Heather Dubreuil at 12:00 AM 6 comments:

The Price of Everything


I've just seen a most thought-provoking and entertaining movie.

The Price of Everything is a documentary by Nathaniel Kahn, recently released for streaming on HBO.

Interviews with artists, collectors, dealers and critics help us to understand the reality of art as commodity. Much as we may disdain the idea of paintings selling in the hundreds of millions of dollars to private collectors, the fact is that one-percenters have a lot of money to invest, and many of the super-rich see art as part of a well-rounded investment portfolio. Museums do not have the funds to acquire art at these prices, and so the artworks are lost to the public. Owners are reluctant to donate their work to museums, even with a tax benefit, if they think the paintings will only end up in storage.

In most cases of hyper-inflated sale prices, it is not the artists who are making money; much of the action happens in the secondary market of auctions. In fact, if an artist's work is subject to a suddenly inflated sale price, it can actually sabotage her/his career, as the prices may not be sustainable. The artist is then deemed to be "old news".

I would recommend this documentary to anyone interested in how art intersects with society.

Email ThisBlogThis!Share to TwitterShare to FacebookShare to Pinterest
Labels: film

Here's another article excerpted from Westmount Magazine. It's about a local research project that supports the positive impact of cultural experiences on the lives of seniors. 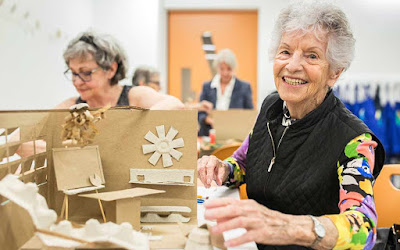 Improvement in the above-mentioned factors did not evolve in the same way over the duration of the study (inclusion of participants in three-month sessions). Some of the benefits increased before and after the workshop but were temporary; others proved to be lasting and cumulative from one workshop to the next, over the entire period of inclusion in the study.
This pilot-project was conducted at the MMFA between December 2017 and September 2018. The study was led by Dr. Olivier Beauchet, Professor of geriatrics at McGill University, holder of the Dr. Joseph Kaufmann Chair in Geriatric Medicine and Director of the Centre of Excellence on Longevity. A total of 150 people aged 65 to 94 took part in this research program, with an average age of 71.6.
“The Centre of Excellence on Longevity now wishes to more specifically determine and understand the beneficial effects by adding the assessment of neurophysiological factors (brain connectivity) at the MMFA, as well as transposing the Montreal experience to institutions abroad. In 2019, we are therefore launching a large international study in partnership with more than ten research institutions paired with museums in Canada and the US, as well as in Switzerland, France, the United Kingdom, Japan, Israel, Australia, Singapore and Taiwan. In the end, we hope many museums will replicate the MMFA’s initiative, because this innovative concept could benefit communities and older people around the world. Museums are now public players in health!”– Dr. Olivier Beauchet


THURSDAYS AT THE MMFA
Every Thursday, in partnership with Réseau Sélection, the Museum offers seniors a stimulating array of free activities that allow them to explore their creativity from many angles: guided tours of the collections, art workshops, dance and yoga sessions. These popular weekly activities have attracted more than 14,000 retirees since they were introduced in 2015.
To read the article in full, please visit https://www.westmountmag.ca/positive-effects-of-art-on-seniors/
Posted by Heather Dubreuil at 12:00 AM No comments: