So pleased to learn that 12 by the Dozen was profiled in the current issue of British Patchwork & Quilting. I was a member of this group for about 7 years, having resigned just last year.

Mentioned in the article is the week-long get-together the group had in England in the summer of 2016, when seven of us met up at Birmingham's Festival of Quilts. At least two former members also shared in the festivities.

Despite the occasional swapping out of members, this international group has continued to forge ahead with quarterly challenges. Their latest series is inspired by individual artists, each of the twelve members setting the subject in turn. The most recent "virtual exhibition" focused on the works of M.C. Escher. Previous challenges have centred on Klee, Klimt and Hundertwasser.

You can learn more about 12 by the Dozen by going to their website and blog. 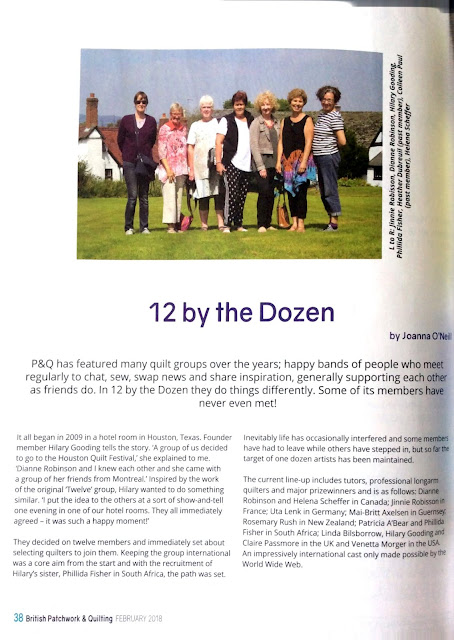 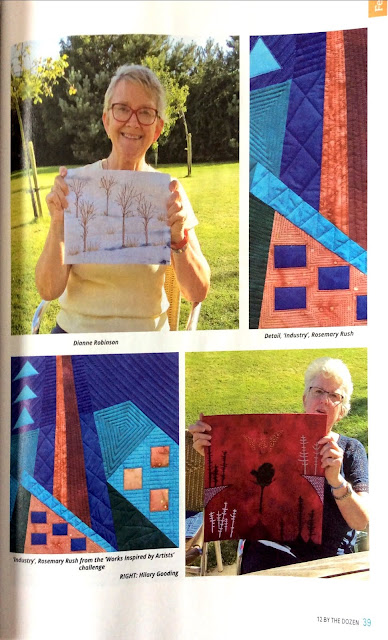 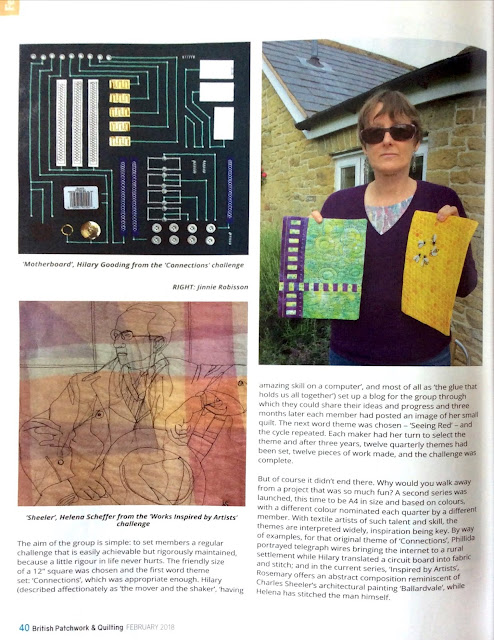 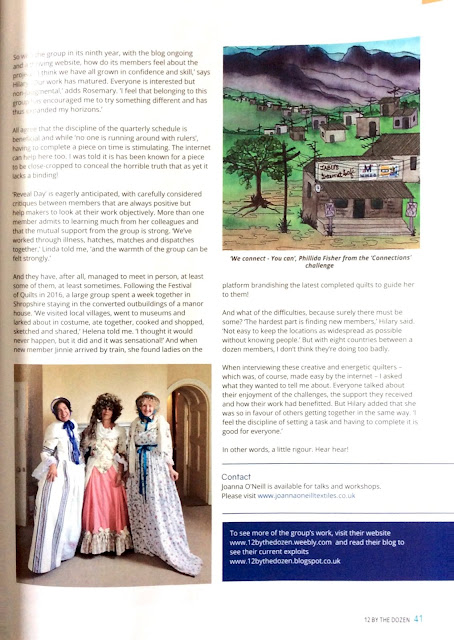 Visit to the William Osler Library


I am preoccupied these days with our Text'art group show, which now has a title. Cloth and Stitch: Inspired by the Maude Abbott Collection will be installed at the Osler Library of McGill University on May 11, 2018. The official opening is May 17.

To familiarize myself a little better with the space, I visited their current show, Materia Medica, by Montreal artist Loren Williams. Williams is the recipient of the Larose-Osler-Artist-in-Residence for 2017, and she was invited by the Osler Library to create a body of work on the theme of Montreal's medical history.

The work in this exhibition draws inspiration from books and artifacts in the Osler Library as well as a wide variety of other sources. Early maps of the city offer a form of time travel, indicating the location of the first hospitals and their large gardens, used for food and medicinal plants. Three hundred year old streets such as rue de l'Hôpital and rue des Soeurs Grises still exist in Montreal today, drawing direct lines to Montreal's medical history, as do streets named Jeanne Mance, Marguerite d'Youville and Penfield.

On my visit, I also explored the two floors of the Osler Library. On an earlier occasion, I was able to visit an inner sanctum, available for viewing by appointment only. It holds a fascinating archive of antique books, as well as the ashes of Dr. Osler himself. The library's holdings number about 100,000 volumes.


The McIntyre Medical Building that houses the library was designed as a round tower. Before construction in 1965, the design was modified to accommodate the Osler Library, which was moved piece by piece (including stained glass windows and plaster cornices) from its original location elsewhere on the McGill campus.
Posted by Heather Dubreuil at 12:00 AM No comments:

While in New York earlier this month, I visited the exhibition "Josef Albers in Mexico" at the Guggenheim Museum. The one-minute video, above, serves as a quick intro.

I have long been a fan of Albers' colour studies. I've also been interested in the work of his wife, textile artist Anni Albers. Both Josef (1888-1976) and Anni (1899 - 1994) were German-born, and both studied and then taught at the Bauhaus until the school was closed by the Nazis in 1933. They then emigrated to the U.S., where they taught at the Black Mountain College in North Carolina, and strongly influenced a whole generation of American artists and craftspeople. Albers' book, "The Interaction of Color", has been a standard text in art studies for more than 50 years.

The Albers visited Mexico 14 times, and the exhibition includes many hundreds of their photos of Pre-Columbian ruins,  clearly laying out how the architecture made a huge impact on Josef Albers' imagery.


Over the years I have been intrigued by the way that Albers used his colour studies to explore the interactions of colour. This show at the Guggenheim suggests that the format for these studies was derived from his experience of the pre-Columbian ruins on his travels to Mexico.


Interested in this series of "Homage to the Square"? Here is a brief introduction to these works, for which Albers is best known.

Our Text'art group of fibre artists has undertaken a project in association with the Maude Abbott Medical Museum at McGill University. (I blogged about this last month.) Due in seven weeks, I am happy to say that my contribution is well underway.

As it's not yet complete, I thought I would share some of the products and processes involved in my piece, which is inspired by the surgical instruments in the museum's collection.

One of the first things I did was to collect an assortment of hand-dyed linen and cotton from my stash. I looked for subtle colours without a lot of chroma, in keeping with the antique quality of the artifacts in the museum. Originally I considered this to be a complementary scheme of gold and blue, but there is a touch of red in there too, so it might be better described as a dulled-down mix of the primaries (yellow, blue and red). Or you could just say it is a mix of warm and cool hues, including neutrals.

Lauma, one of the Text'art group, contributed some aged linen that added the perfect hint of antiquity. 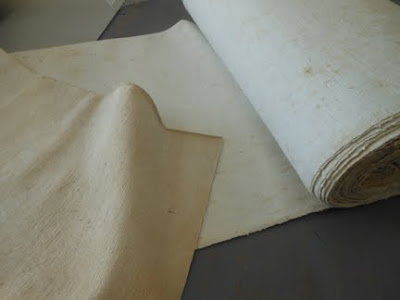 A small patch of texture was created by stitching scrim to a background of hand-dyed cotton. 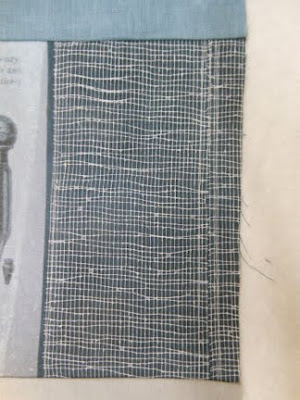 One of the elements in my composition is made of layered synthetic tulle and synthetic organza on top of hand-dyed cotton, with a stitched motif of "pebbles". It was then distressed with a heat gun. The photos below show how the upper layers have been burnt away, creating a very "organic" texture.

Artist Transfer Paper was an effective way to incorporate photo images into the project. It's also a useful method of adding text to a composition.

Light Steam-a-Seam 2 allowed me to "fuse" cut-out cloth shapes onto a cotton or linen background, later to be machine-stitched into place. 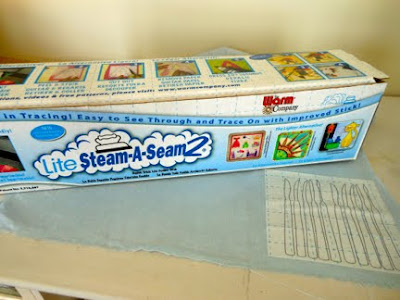 And finally, when the project is completed, I will add a coat of Fabric Shield, which protects the textiles from dust and from fading due to sunlight exposure.

Hope to share more glimpses of the work in progress soon.
Posted by Heather Dubreuil at 12:00 AM 1 comment:

Edvard Munch: Between the Clock and the Bed

Just before it closed, I was able to take in the recent show of paintings by Edvard Munch at the Met Breuer.


The painting that lends its title to the exhibition is shown above. A self-portrait, it positions the artist between the faceless clock (time is up?), and his bed, where he expects to die. The walls in the background are lined with many of his paintings.

The selection of works confirmed the general impression that Munch (1863 - 1944) was not, to use a current expression, "comfortable in his own skin." The Norwegian artist, best known for his iconic "The Scream" was, in his later years, preoccupied with illness and death, and had conflicted feelings about women that were vividly expressed in the paintings on view.


Several of the images depict Munch's physical struggles, including insomnia and bronchitis.


Here are two of the six paintings he produced that were inspired by the death of his sister. Note that the technique of the later one is much more vigorous. Munch seems to be pushing his style into the Expressionism for which he is best known.


This next painting recalls the famous Death of Marat, by the French painter Jacques Louis David. It was inspired by an incident in Munch's life that involved an argument with his fiancée and resulted in him shooting himself in his hand.


His portraits of women reflect his discomfort with sexuality.


As so often happens when traveling, it's the events that you stumble upon that make the biggest impression. 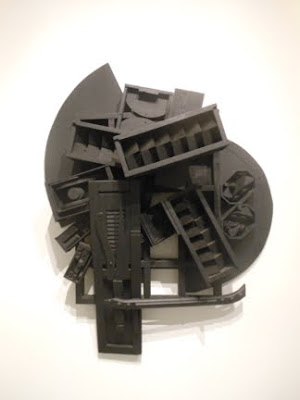 While walking through the Chelsea neighbourhood in New York, I noticed a banner for Black & White, a show opening that evening at Pace Gallery. As I've always loved the work of Louise Nevelson, I made a special effort to return to the area two days later to see the show, which was swarming with visitors.


"Louise Nevelson (b. 1899, Kiev; d. 1988, New York), a leading sculptor of the 20th century, pioneered site-specific and installation art. She is recognized for her sculptures comprised of discarded furniture and other wood elements found in the area surrounding her studio. Composing these elements into nested, box-like structures, she would then paint them in monochromatic black, white or gold – transforming disparate elements into a unified structure. She also experimented with bronze, terracotta, and Plexiglas, moving as well into collage, works on paper, and the realm of public art. With her compositions, Nevelson explored the relational possibilities of sculpture, summing up the objectification of the external world into a personal landscape. Although her practice is situated in lineage with Cubism ad Constructivism, her sense of space and interest in the transcendence of the object reveal an affinity with Abstract Expressionism. Nevelson represented the United States at the Venice biennale in 1962, and today her work is held in over ninety public collections worldwide."

Many of the black sculptures were grouped in a room with black walls, illuminated by blue light. requiring the viewer's eye to adjust to the minimal light conditions. This is how Nevelson preferred her black-painted works to be shown. 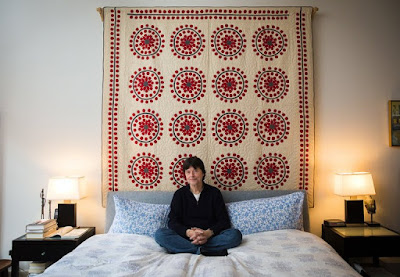 A recent article in The New York Times is part of an ongoing series in their Art & Design section, called Show Us Your Wall.

The article coincides with a newly-opened show at the International Quilt Study Center & Museum in Lincoln, Nebraska, titled Uncovered: The Ken Burns Collection. 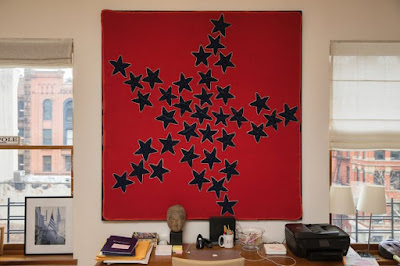 The International Quilt Study Center & Museum is located on the University of Nebraska - Lincoln's East Campus and houses the largest publicly held quilt collection in the world.

Here's a powerful quote from Burns about his relationship with the antique American quilt:


"As a collector, I'm looking for something that reflects my country back at me. Quilts rearrange my molecules when I look at them. There's an enormous satisfaction in having them close by. I'm not a materialist. There are too many things in the world, and we know that the best things in life aren't things. Yet there are a few things that remind me of the bigger picture.

"We live in a rational world. One and one always equals two. That's okay, but we actually want—in our faith, in our families, in our friendships, in our love, in our art—for one and one to equal three.

"And quilts do that for me."