"Through the Prism of Gender"

A thought-provoking piece in the New York Times about women in art caught my attention last month. You can read the whole article on-line. Written by Hilarie M. Sheets, it begins,


"At the peak of her career in 1976, Georgia O'Keeffe refused to lend her work to a pivotal exhibition in Los Angeles, 'Women Artists: 1550 to 1950'. It was one of a wave of all-female shows - some 150 - that decade to spotlight artists largely ignored by major museums and galleries. But O'Keeffe, the most famous female artist of her day, saw herself in a different category - 'one of the best painters,' period.

"The feminist art historian Linda Nochlin borrowed an O'Keeffe painting elsewhere and put her in the show anyway. Yet despite these exhibitions, neither O'Keeffe nor any other woman would break into "Janson's History of Art," the leading textbook, until 1987, and equality remained elusive.

"While some artists are ambivalent about being viewed through the lens of gender, the all-women's group show, which fell out of favor in the '80s and '90s, is flourishing again...."


The article goes on to list a number of current shows focusing on the work of women, which are seen by some as a corrective measure, making up for centuries of being overlooked by the mainstream. Also discussed is the price gap: good art by women is relatively under-priced, and so considered to be a buying opportunity.

Currently, the Montreal Museum of Fine Art is running "Her Story Today", focusing on the work of six contemporary painters, all women, from Quebec and Canada.

I think that the public financing of these gender- or minority-specific museums is justified by the lack of representation in the mainstream. If women taxpayers are required to fund institutions which allow them less than ten percent of the floorspace, why should there not be a remedial "catching-up"? Those who argue that the quality of the art on display should trump issues of equal representation might reflect on the degree to which cultural bias determines our ideas of "quality".  The article in the New York Times quotes Janice Sands, the executive director of Pen and Brush, a 122-year-old nonprofit New York gallery that showcases only work by emerging female artists and writers:


"Our conclusion is that showing work by women exclusively is a way to get right at the heart of the stereotype that there's just not enough good work by women. People come into our gallery where there is no obvious indication that all the work is by women. They read the information cards. They're surprised. They buy."

It is to be hoped that with curators more conscious than ever about inclusion of minorities in their shows and collections, corrective measures will some day not be necessary. Parallels can be drawn to "affirmative action", a similarly controversial topic.


One woman painter who has recently caught my eye is Montrealer Lorraine Pritchard.  I want to learn more about her, not because she's a woman but because I really like her take on abstract expressionism.
Posted by Heather Dubreuil at 12:00 AM No comments:


On April 30, I posted images of small "colour field paintings", from the final assignment in my on-line colour class. I've become quite addicted to making these little studies, and have decided to show some of them at the upcoming spring show for the Hudson Artists. I think twelve will make an interesting display when grouped together.

Each one is acrylic paint on paper. The paint, both transparent and opaque, is applied in layers until some depth and interest is achieved. The paper is then mounted to a birch board, the edge of which is painted black. This is an inexpensive mounting that gives the work a "presence" on the wall, and helps flatten the paper.

When I met with my group of text'art friends a couple of weeks ago, we all had fun putting together little swatches of colour to make three-colour collages. We looked for colours and proportions that had some "zing". In my childhood, people would have said that the colours "clashed". Does anyone say that anymore?

I can still clearly remember being told by my home economics teacher in grade 7 that "Blue and green should never be seen together except in the washing machine." And I also recall people lamenting the choice of green shingles on a roof, as it would "clash" with the blue sky. Oddly, no one ever seemed to consider how green trees looked against the sky. I guess they weren't fans of the Fauves.


So, what am I learning from these little studies?

I realize I can use hand-dyed cloth to achieve this depth of colour. But working with cloth, piecing it together or collaging it into place, would create hard edges, and I much prefer the soft, modulated edges one can achieve with paint. So, do I just paint on cloth to get those soft edges? To be resolved....
Posted by Heather Dubreuil at 12:00 AM No comments:


So looking forward to the annual spring show of the Hudson Artists. This time around, I will be showing some recent colour studies in paint and mixed media. More than 30 artists will exhibit their latest work in a wide variety of media.


The vernissage is scheduled for Friday evening, June 3, 7:30 - 9 pm. The show continues from 10 am to 5 pm on Saturday and Sunday in the Hudson Community Centre, 394 Main Road in Hudson.

This year, our show coincides with a craft and gardening market, to be held on Saturday, June 4. This event has been organized by the Hudson Fine Craft group.

And of course our famous walking trails, Saturday flea market and many fine eateries also await your visit. Please consider making a day of it!
Posted by Heather Dubreuil at 12:00 AM No comments:


The Women's Art Society of Montreal will hold their annual show at the end of May. I am delighted to have had two pieces accepted into this juried exhibition.

The venue is in a beautiful building with great historical significance: the former home of the Grey Nuns, now owned by Concordia University. Not sure how much access visitors will have to the building but the library, located in a former chapel and usually available only to registered students, is supposed to be a marvel.

And here are the two works I will have on display:

The McCord Museum's next show runs May 26 - September 25. Titled "Eleganza: Italian Fashion from 1945 to Today", and organized by the Victoria & Albert Museum in London, it


"celebrates the work of the most celebrated Italian designers, particularly following World War II. In addition to viewing numerous dresses and creations by Valentino, Armani, Fendi, Prada, Dolce & Gabbana and Emilio Pucci, to name just a few, the public will discover pieces by new and emerging designers as well as a range of accessories, photographs, magazines, drawings and film clips: all witnesses to the glamour and influence of Italian fashion from 1945 to today." 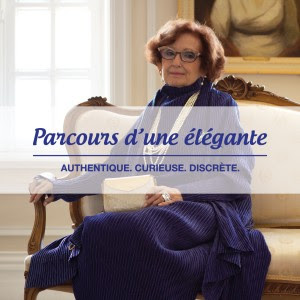 
"Over the last few years, this generous donor has given the museum more than 550 inspiring garments and accessories. The exhibition presents 300 of them as a series of refined outfits, reflecting their owner’s unique, sophisticated image. Whether bought from fancy boutiques or thrift shops, made at home or in specialized workshops, each piece tells the story of an elegant woman: authentic, curious, discreet." 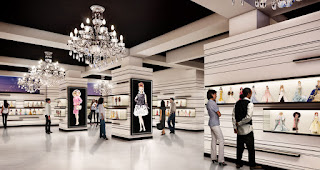 And let's not forget the biennial quilt show staged by Courtepointes Quebec, May 26 - 29, at Collège André-Grasset. Salon 2016 is a showcase for Quebec quilt-making, including the traditional, the contemporary and the innovative. Workshops are available on a wide range of subjects. 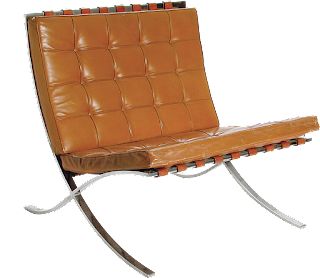 Finally, another exhibition that interests me is not restricted to textiles, but focuses on the 20th-century design collaboration of Alfred H. Barr, Jr. and Philip Johnson.


"The exhibition traces the development of modern design from Bauhaus up to the influential MoMA exhibitions of the 1930s. It brings together archival documents and over seventy design objects - furniture, textiles, and industrial products...."

Partners in Design continues at the Montreal Museum of Fine Arts until August 21.
Posted by Heather Dubreuil at 12:00 AM No comments:

I have a thing for chairs. I've been shopping for chairs in the last few weeks and my fascination with them is more evident than ever.

Here is what Ben Shahn did with chairs:

I saw this painting at the Hirshhorn Museum in Washington recently, and I was struck by the title. The repetition of the shapes and lines is very rhythmic, even musical, though of course the title also refers to the fact that these chairs and their accompanying music stands belong to the (absent) members of an orchestra. Here is a variation on the theme:

Outside the Hirshhorn were these beauties, arranged in groups on a terrace. 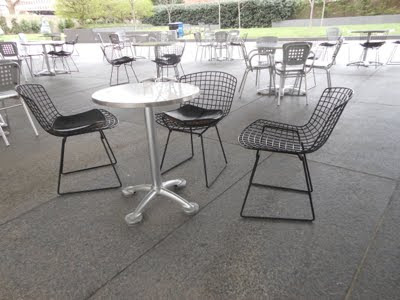 Later that day, at the Phillips Collection, I saw this grouping of eighteen works in gouache and India ink by German artist Georg Baselitz.

While lunching at the Garden Café at Washington's National Gallery, I was charmed by the lines on these sweethearts. I've since discovered these are actually called "Sweetheart Chairs". They remind me of Raoul Dufy's line drawings. 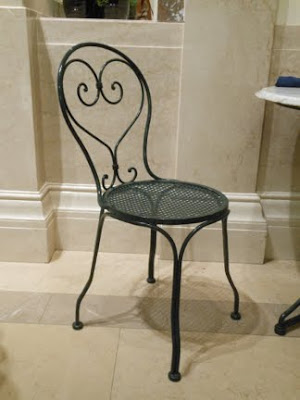 The outdoor sculpture garden at the National Gallery featured this striking piece:
I am certainly not the first to be intrigued by the nature of the chair.

Of course there are the Big Name chairs:


And then there is the piece I made earlier this year. Perhaps it will be the first in a new series?

Delighted to have been asked to teach at the upcoming conference for Courtepointe Quebec Quilts, the provincial umbrella association for all of Quebec's quilt guilds. Salon 2016 runs from May 26 - 29, 2016, and will be held at Collège André Grasset in Montreal. Included are many workshops and a dynamite quilt show.

My two-day workshop, "Building Blocks", will be held on Friday, May 27 and Saturday, May 28. I will be teaching my "cityscapes" technique, which includes the use of heat-away stabilizer film to organize the placement of appliqué shapes as well as to guide the machine stitching. Along the way there will be lots of discussion of the principles of good composition.

Spots are still available in my workshop, and in many others. Please check out the CQQ website for more information.

I'm looking forward to this opportunity to re-connect with old friends, to make new friends, and to see some wonderful quilts, both traditional and innovative.

The Hudson Fine Craft group has initiated a month-long event here in our little town. Included is a display of artifacts in our local historical museum, all of them related to "women's work": spinning, sewing, weaving, quilting, etc.

As well, a call has gone out to artists in all mediums to produce a 16" x 16" piece for a show titled "Square Roots". Each piece is to reference the domestic arts. Knowing that the show is to be hung in the local library, I decided to submit this piece. I think my use of cloth and stitch qualifies it to be included in this show. Uniquely to this piece, I experimented with multiple, wobbly outlines, making them look "sketchier".

Here is the artist statement I submitted for the piece:


"As a child, I loved to curl up on the daybed of my grandmother’s cottage porch. I would spend hours there reading. I especially liked to watch the thunderstorms as they advanced across the lake, all the while safe in the embrace of the musty, over-sized pillows. Now, in my own home, I have a cozy reading corner that overlooks a different lake."

Located at 60 Elm, the War Memorial Library has odd hours which are best determined by visiting their website. The "Square Roots" show runs for the month of May.