This year at the MNBAQ

For those who have always meant to visit the Musée National des beaux-arts du Québec, this may well be the year to make the trip. Three major exhibitions are planned that will have a broad appeal.

From February 13 - May 18, 2020, the museum will host Frida Kahlo, Diego Rivera and Mexican Modernism. Presented are more than 150 items, with ten paintings by Kahlo, including the well-known Self-Portrait with Necklace, Self-Portrait with Braid, and Diego on my Mind. Also included: twenty works by other Mexican painters and 85 photographs by important Latin American photographers of the period. The show has already traveled widely.

From June 20 - September 27, 2020, Turner and the Sublime will make its exclusive Canadian appearance. Organized by the Tate, it includes 75 paintings and works on paper, covering the biggest portion of Turner's career. Featured will be a Turner painting from the holdings of the MNBAQ, Scene in Derbyshire (1842), bequeathed to the museum by the estate of Maurice Duplessis.

As well, Emily Carr and her Contemporaries will be staged at the MNBAQ from November 5, 2020 - January 17, 2021. Meant to serve as a counterpoint to the one- hundredth anniversary of the founding of the Group of Seven, the show assembles some 250 works by pioneering women painters, photographers, sculptors, architects, and filmmakers, including 50 works by their Aboriginal contemporaries. Names that will be familiar to Montrealers include Paraskeva Clark, Marion Dale Scott, Prudence Heward and Anne Savage.

Whenever I visit the MNBAQ, I enjoy touring the wing that once housed the city's prison. Four floors of this space are permanently dedicated to four important Quebec artists: Jean Paul Lemieux, Alfred Pellan, Jean-Paul Riopelle, and Fernand Leduc. Also part of the permanent collection is the fascinating sculpture The Flux and the Puddle by David Altmejd, not to be missed.

The museum has a great restaurant too, and on a summer's day you can't beat the view from a table on the terrace.
Posted by Heather Dubreuil at 12:00 AM No comments:

This immersive experience of image and music is currently staged in the cavernous space of Arsenal, an art venue in southwestern Montreal. It has been getting rave reviews, and continues until March 1, 2020. 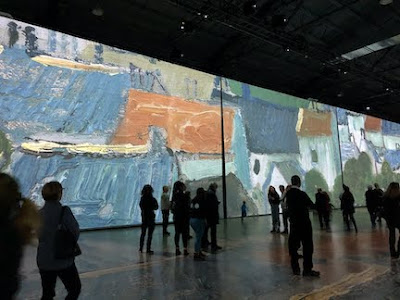 Originally designed to be projected in the old bauxite quarries of Les Baux-de-Provence, it is now a "must-see" for winter-weary Montrealers.

More than 200 of Van Gogh's paintings and drawings are thematically presented, sometimes in extreme close-up, allowing viewers to appreciate the energy of the artist's brushwork. 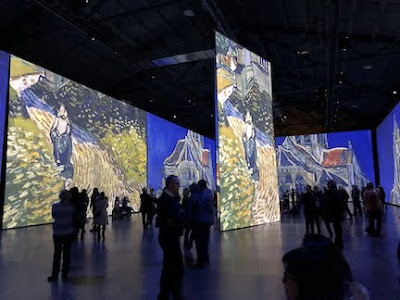 The accompanying sound track is replete with well-chosen musical selections from Saint-Saëns, Satie, Prokofiev, and others. 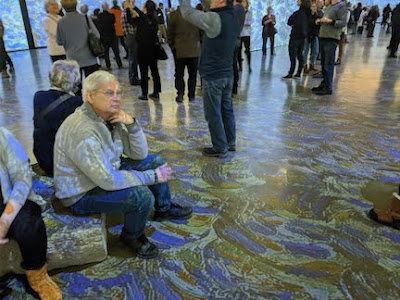 The film portion of the exhibit runs about 30 minutes, but visitors should plan on spending some additional time reading the bilingual explanatory panels about Van Gogh's life.

Why the Art World is Embracing Craft: Artsy

Thank you to Michele for bringing this recent Artsy post to my attention. Readers should be able to access it here.

The author, Glenn Adamson, celebrates a renewed interest in craft as art, evidenced by several major museum shows and by rising sale prices for craft-based art.


He proposes that bringing craft "into the circle" is a way of ensuring the inclusion of women and non-Western artists.


"Craft is also a rich tapestry of ethnic diversity, having been practiced expertly by people of all nations and regions for millennia. You can make a strong case that the long-standing marginalization of the crafts—and the self-evidently crazy idea that painting isn’t one—was just the art world’s way of practicing sexism and racism, barely disguised as a policing of disciplines rather than people."

He also suggests that the embrace of handwork reflects our hunger for "materiality" in an increasingly virtual world.


"At a time when our collective attention is dangerously adrift, trapped in the freefall of our social-media feeds and snared in a pit of fake facts, handwork provides a firm anchor. It cannot be spun. It gives us something to believe in."

I expect to visit the MOMA show before it closes, and will share the experience by posting here.
Posted by Heather Dubreuil at 12:00 AM No comments:


I am delighted to be part of a three-artist show at Westmount's Victoria Hall. Curated by Victoria Leblanc, the exhibition includes the whimsical ceramic sculptures of John Fretz and the digital photo prints of Mana Hamami, with their architectural themes.

The contrast between Fretz's highly tactile sculptures, Hamami's glossy, slick photos, and my textural works in fibre makes for an interesting show. Many of my pieces are in a square format, as are all twelve of Hamami's photos, and this helps the show hang together nicely.


It is remarkable how seeing my work in a good venue, with great lighting, gives me an opportunity to re-evaluate a piece or a series in a positive way. My series in hand-dyed linen, for example, was not particularly well-received originally, but I was encouraged by the reception it was given at this show.

Below is the text that the curator prepared for my profile:

Heather Dubreuil presents both semi-realistic and abstract textile art.  In Cityscapes the artist transforms her own photographs of  everyday urban scenes into elegant compositions of shape, line and expressive colour. Her most recent series features hand-dyed linen works pieced together and delicately detailed with corded threads, machine stitching and hand embroidery. Their square format and size – 24 x 24 inches - result in poised colour fields reminiscent of the pioneering masters of minimalist abstraction.  Dubreuil’s works, however, carry the feel of textile; their textural surface, warm colour palette and hand embroidery lending them a sensuous, haptic appeal.  Best known for her work in cloth and stitch, Heather also explores abstract imagery with acrylic paint and collage, some of which are included in the exhibition. Dubreuil received a BFA from Concordia University. She has shown in many solo and group exhibitions and her works appear in collections in Canada, the U.S. and Europe. She has also been profiled in several books and magazines.

In my post of November 17, 2019, I shared some images, descriptions and inspirations of work included in our group show, Tribute to Leonard Cohen, at the Musée Régional de Vaudreuil-Soulanges.

Two months later, at 2 pm on Sunday, January 19, the artist-participants of the exhibition will be at the gallery to talk about their work.

Presentations will be in French and English. The show closes on January 22. 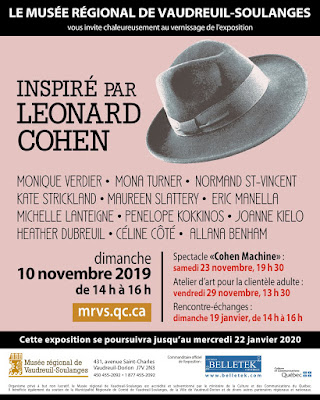 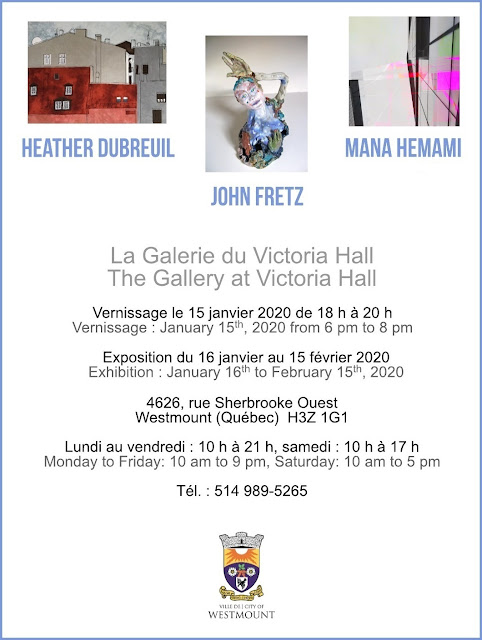 The curator of our exhibition, Victoria LeBlanc, will meet with the three artists on January 13 to hang the show. I will bring along paintings as well as works in cloth, and the curator will choose from them and place them to their best advantage. Her goal is to make each artist shine!

The Westmount Public Library is always obliging about acquiring books I request. Most recently, I suggested they buy "Canada and Impressionism: New Horizons, 1880-1930", the book that accompanies an exhibition of the same name, currently on tour in Europe. This same show will open at Ottawa's National Gallery in the fall of 2020. You can read more about the show on the Gallery's website. 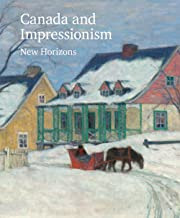 The first of ten essays in the book is the Prologue, written by ex-Montrealer Adam Gopnik. I am a huge fan of Gopnik, who often writes in the New Yorker and occasionally speaks in Montreal.

Here are a few snippets from his insightful essay, titled "Canada and World Impressionism".


"As modern art becomes for us less a train racing forward than a many-sided landscape to be explored at leisure, and for pleasure, progress becomes a less certain term."

"Impressionism is a misnamed French movement from the 1860s to the 1880s. Actualisme might have been closer to its true spirit, which was not to record a quick impression of a scene or place but to give permanent form to the ambivalent pleasures of modern life, and in a style shorn of rhetoric and the painstaking pomposity of official art. It was an art about light and life, and how each illuminates the other."

"Light and life, light as it falls and life as it is. Though truth to local colour is no longer the whole of art, it always will be the heart of painting. Any art that chooses light and life as its object and subject, whatever flag it flies, will shine. The best kind is light on life in a winter house on a snowy city evening, drawing us home, even as we stand outside to look a moment longer."

New exhibition at the MMFA

Another crowd-pleasing show is scheduled for this spring and summer at the Montreal Museum of Fine Arts. "Paris in the Days of Post-Impressionism: Signac and the Indépendants" will run from March 28 until September 17, 2020.

"Discover a magnificent body of 500 paintings and graphic works from an exceptional private collection to be exhibited in its entirety for the first time – the largest collection of works by Paul Signac, but also of avant-garde: Impressionists (Monet and Morisot), Fauves (Dufy, Friesz and Marquet), Symbolists (Gauguin, Mucha and Redon), Nabis (Bonnard, Denis, Lacombe, Sérusier, Ranson and Vallotton), Neo-Impressionists (Cross, Guillaumin, Luce, Pissarro, Seurat and Van Rysselberghe) and observers of life in Paris (Anquetin, Degas, Lautrec, Picasso and Steinlen).

For more information, visit https://www.mbam.qc.ca/en/exhibitions/upcoming/paris-1900/.
Posted by Heather Dubreuil at 12:00 AM No comments: