Impressionism in the Age of Industry @ the AGO

I had a wonderful visit to the Art Gallery of Ontario last week, taking in the new show "Impressionism in the Age of Industry: Monet, Pissarro, and More". You can learn more about the show by going to the AGO's website.

Impressionism often brings to mind pastoral landscapes and scenes of the leisure class enjoying their picnics and boating excursions. But this exhibition shows the grittier side of Impressionism. The late 19th century was an age of rapid industrialization. The railroad and its iron bridges not only transformed the landscape but also changed the way people lived. Artists seized this moment of radical change, turning painting on its head.

The exhibition is loosely grouped into themes: the railroad, the busy ports, factories, labourers, etc.

Many of the artists in the show are the well-known names that one would expect to see, but others were new to me. And while it's the paintings that drew my eye, there are a number of prints, photographs and film clips worth a second look.

Also from the review in the Globe and Mail,


"AGO curator Caroline Shields, [is] a new hire who pitched this show to the gallery in her job interview, ... then got it open in a mere 14 months." 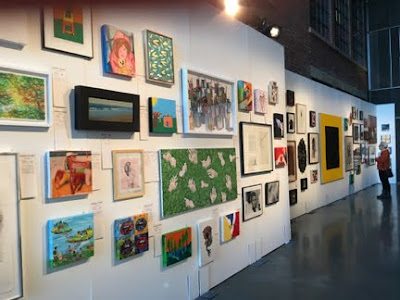 So glad I was able to see the Parle-moi d'amour event now showing at the Wilder Dance Centre, 1435 Bleury, Montreal.

The exhibition-auction brings together over 300 works of art made by Les Impatients and by professional artists. All works will be auctioned off to support the organization Les Impatients and their activities. Les Impatients' mission is to help people with mental health issues through artistic expression. It offers 64 workshops each week, reaching 650 patients per week, in 15 workshop locations in Montreal and area. It also encourages interaction with the community by sharing the works of its participants.


A silent auction is ongoing, and the event will end with a soirée on the final evening. February 27, 2019.

The project will continue in April (St.-Lambert) and in May (Verdun). For more information, please visit the website.
Posted by Heather Dubreuil at 12:00 AM No comments:

A recent article on the BBC Culture website tells the story of the modern art collection amassed by Farah Pahlavi, third wife and widow of the Shah of Iran. 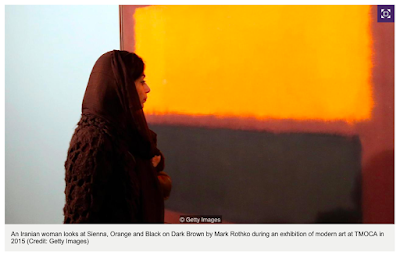 Now 80 years old, Pahlavi is the subject of a new book, Iran Modern: The Empress of Art, by Viola Raikhel-Bolot and Miranda Darling. (As the book retails for £650 I am unlikely to buy it.)

Before her husband was deposed and exiled in Egypt, Pahlavi collected about 300 works of modern Western and Iranian art. Artists represented in the collection include Rothko, Picasso, Warhol, Bacon, Magritte, Renoir and Pollock. The collection is considered to be the greatest (and certainly the most valuable) collection of modern art outside Europe and North America. It was assembled in the early 1970's, funded by the National Iranian Oil Company on behalf of the state. 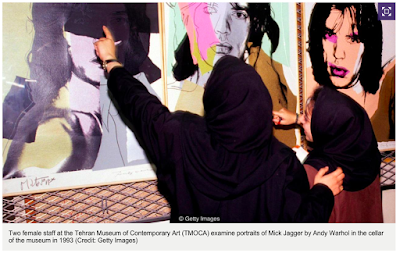 Pahlavi is also credited with the establishment of the Tehran Museum of Contemporary Art, where the collection is now stored, but rarely on display. A touring exhibition to Berlin and Rome was planned for some of the art in 2017, but ultimately cancelled.

A fascinating story. You can read it here. Thank you, Lauma, for bringing this article to my attention.
Posted by Heather Dubreuil at 12:00 AM No comments:

A visit to the Musée d'Art de Joliette

I was pleased to visit the Musée d'Art de Joliette for the first time last week, on the occasion of its exhibition, "James Wilson Morrice: The A.K. Prakash Collection in Trust to the Nation".


Near the entrance to the show we were greeted by a 15-minute video that introduced us to the work of  Morrice (b. Montreal, 1865; d. Tunis,1924), and to the achievement of the collector, who donated some fifty of Morrice's paintings to the National Gallery of Canada.


In the video, the collector Prakash reveals, "My relationship with Morrice and his work is that of a lover and a beloved. It has never been didactic, or scientific or analytical. It has been a magnificent obsession that I have pursued with reckless abandon."

Morrice traveled widely, and his subjects range from Quebec winter scenes to Venetian canals, Parisian gardens, Caribbean seascapes and Tunisian markets. He spent most of the Great War in Paris, and was commissioned by the Canadian War Records Office to record the advancement of Canadian troops as a member of the Canadian Expeditionary Force.


Many of the paintings in the show are small studies, measuring no more than 6 or 8 inches. And many of these, even the smallest, are displayed in very large, heavy and ornate frames, as was the custom in the early 20th century. Both of these aspects of the paintings disappointed me, though I did make an effort to appreciate them as "small gems".

The signage on the gallery walls is entirely in French, but a small, illustrated booklet is available to  guide English-speaking visitors.

The museum is housed in a modern, purpose-built building, and some of its other galleries showcase varied collections of Canadian art, including aboriginal works, with an emphasis on Quebec painters. Below are a few examples:


The Morrice show continues in Joliette until May 5, 2019.
Posted by Heather Dubreuil at 12:00 AM No comments:


Perhaps this is just the tonic needed as we struggle through a very long winter.

Thank you to SAQA (Studio Art Quilt Associates) and its Fiber Art Friday newsletter for passing along the link to this resource.
Posted by Heather Dubreuil at 12:00 AM No comments:

With a particularly difficult winter underway, I haven't been out and about as much as I would like. But one show I very much hope to see is "James W. Morrice: the A.K. Prakash Collection in Trust to the Nation", organized by the National Gallery of Canada and staged at the Musée d'Art de Joliette.


I have never visited Joliette, but it's only an hour from downtown Montreal, and the museum has an excellent reputation. For me, a fresh discovery is one of life's joys.

Here's a partial description from the show's web page:

"Organized geographically, [this exhibition] follows in the foot-steps of Morrice from his early years as an expatriate artist in Paris through his numerous sketching trips around France, Italy, North Africa and the West Indies, to his annual trips home to Canada. It celebrates both Morrice's vital role in advancing modern artistic trends in Canada and A.K. Prakash's passionate commitment to understand, celebrate and preserve his legacy for all Canadians." 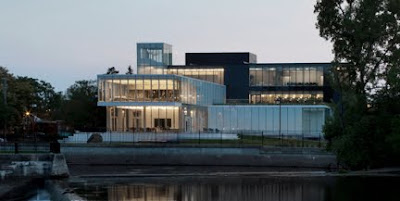 The show continues until May 5. To learn more about James Wilson Morrice, click here.
Posted by Heather Dubreuil at 12:00 AM No comments:

Here are some photos from the opening of "Stitched: a Homecoming", the two-person textile art show currently staged at the Mississippi Valley Textile Museum in Almonte, Ontario. I was excited to have my cityscapes included in this show along with the intricate, detailed work of British artist Anne Kelly, who grew up in Ontario and Quebec. 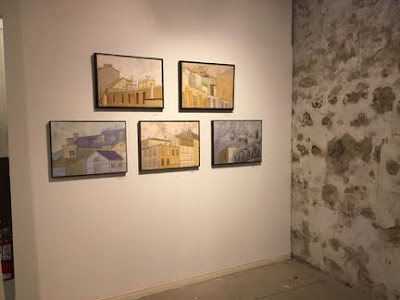 Thank you to all those who came out for the official opening. Your support means a lot to me!

The show continues until March 23, 2019. Visitors might consider spending a few hours in picturesque Almonte, with its thriving commercial area, filled with independent shops and wonderful restaurants. And the MVTM itself has a well-organized display of artefacts that illustrate the history of the textile industry in eastern Ontario.