I'm pleased to participate in the pre-Christmas show at the Arbor Gallery, 36 Home Street, Vankleek Hill.  This event offers affordable art and fine craft for holiday giving. I will be showing six pieces from my Boathouse series.
The dates are October 31 to January 13, with a vernissage scheduled for Saturday, November 2, from 1 to 3 pm.
Regular hours are Thursday to Sunday from noon to 4 pm. Please check their website for more information: http://www.arborgallery.org
It is suggested that you phone before visiting to confirm that the gallery will be open: 1-877-616-5086.

"A Taste for Modernism", Quebec City 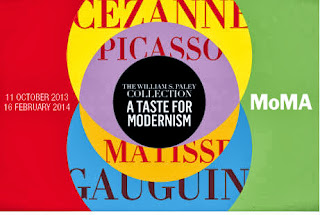 Thinking about a getaway as winter approaches? A wonderful show of French Impressionist and post-Impressionist work is being staged at the Musée National des Beaux-Arts du Québec, October 11 - February 16.

The show has been organized by the Museum of Modern Art in New York, and comprises 62 paintings, sculptures and graphic works from their William S. Paley collection. Artists include Cezanne, Degas, Rodin, Gauguin, Toulouse-Lautrec, Matisse, Derain and Picasso. The show will tour North America for almost two years, with Quebec City as its only Canadian stop.
Posted by Heather Dubreuil at 12:00 AM No comments: 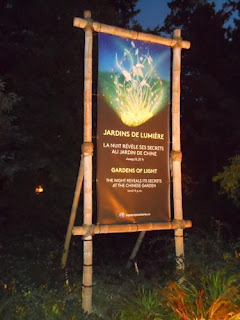 When  the Women's Art Society of Montreal arranged a group visit to the Jardins de Lumière this week, Michele and I jumped at the opportunity. This event at Montreal's Botanical Gardens has been getting great reviews since it opened on September 6. 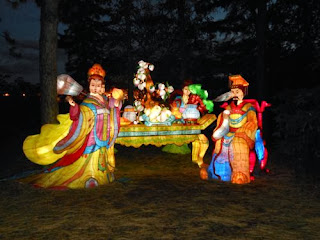 While many of our group were impressed with the figures in the Chinese garden, Michele and I felt they were "Disneyesque", to the point of being garish. Not much variety, subtlety or artistry, from our point of view. 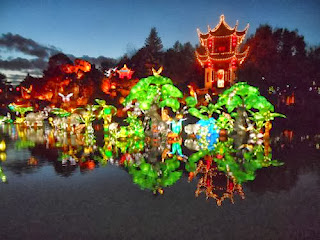 The sculptures appear to be made from textile, stretched over an armature and lit from within.

A musical soundtrack accompanied us as we toured, and a lone musician performed a solo on a stringed instrument in a Chinese pagoda. 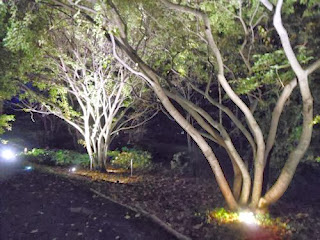 As we left the Chinese garden we took an unexpected turn and found ourselves in the Japanese garden.

We came upon a Japanese-styled building, and inside we discovered an exhibit about washi paper. We read about how it is made and saw lots of examples. 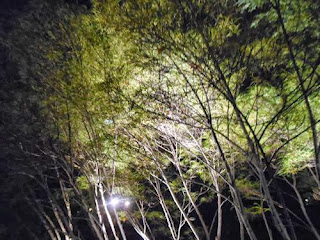 The best part of the evening was to come. As we left the building, we entered the Japanese garden, with its many beautifully structured trees, subtly lit from beneath. Spotlit architectural accents, like bridges and lanterns, completed the landscape, creating a panorama of stark simplicity and haunting natural forms. 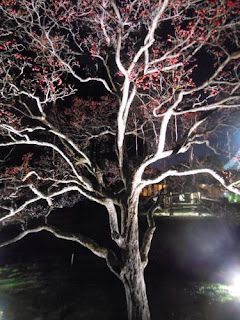 Midway through the circuit, we became separated from the other members of the group. We hope that they too stumbled upon the magic of the Japanese garden, which for us was the highlight of the evening.

If you're planning a visit, be sure to see both gardens, if only to compare the two very different styles. The event continues until November 3.

For more information, and to see a 2-minute video clip of the exhibit, please visit the website.

Two vernissages in 48 hours. Here's a photo of Michele and me, taken in front of our side-by-side boards during a quiet moment at the Hudson Artists show. 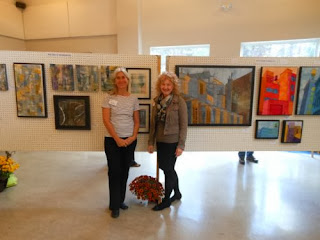 The vernissage at Stewart Hall was great fun, with opportunities to chat with many of the other 79 artists. It was just too crowded to take any photos, but here's one taken yesterday when the gallery was quiet. That's Helena's "colour explosion" on the far left, and my two Cityscapes on the far right, with Linda Creasey Brown's two urban landscapes in the centre.

As always, the curators of the Stewart Hall show chose well from a wide variety of media, and managed to group the pieces by theme or palette, making for an effective display. The Stewart Hall show continues every day until December 1, 1 - 5 pm, 176 Lakeshore Road in Pointe-Claire. Wednesday evenings till 9.
Posted by Heather Dubreuil at 7:37 PM No comments:

While visiting the Maine shore on the holiday weekend, I spent some time at the "Piece Work" show at the Portland Museum of Art. I think much of the work in the show would resonate with those of us who work in fibre.

This show is the eighth consecutive biennial of its kind, showcasing work by living artists with a Maine connection. The title of the show, "Piece Work", reminds viewers of the "relentless process of making, building, and configuring materials. While industrial piecework is less common than it once was in the United States, the concept evokes the historical notions of intense handwork and the assembly of complex items from multiple parts. It also describes an artistic movement that is particularly resonant in Maine."

The posted description of the show continues, "Many artists are returning to process driven, accumulative practices, in which objects and images are built, measured, manipulated and amassed over months, sometimes years. In addition, many of the artists translate one medium to another (and sometimes back again) as a crucial step in the process of creation: drawing becomes sculpture; photographs translate into drawings; textiles merge into paper." Incidentally, there was not a single painting in oil, acrylic, watercolour or pastel in the show. There were two series of drawings. and some photography in the collection.

Shown above is my favourite piece in the show, Library by Abbie Read. It is made of books and found objects, and measures about 15 feet wide and 6 feet high. I could have spent an hour studying it.
The label beside the work reads, "Abbie Read's Library is a patchwork of antique and handmade books suggesting the folk-art aesthetic of quilting and Renaissance cabinets of curiosities, but it also recalls the tradition of collage, which is associated with avant-garde art of the 20th century. Read, a bookmaker and well-known landscape designer, has created a veritable topography of intricately wrought books."

Another work in paper is shown above. What appears to be a garment is in fact unwearable. It is woven of shredded love letters. Made by Crystal Cawley, it suggests that one might be enveloped by the love expressed in the letters, just as one could be wrapped in the comfort of an oversized garment.
"For several years, printmaker and installation artist Carrie Scanga lived on Portland's Eastern Promenade and eagerly watched party boats sail past her home. The boat in Echolocation is an imagined replica, its form structured by memory rather than literal transcription.

"Scanga situated the boat in a 'sea' of printed, cut and folded paper, creating an ambiguously dark and tumultuous environment within which the hefty vessel reigns."

If you are anything like me, you are ambivalent about the exquisite, traditional embroideries so often on display in museums, especially those made by girls as young as seven or eight. While I marvel at the mastery of technical skills required to produce these fine works, I deplore the limited choices for young women of their era, and wonder what coercion they may have been subjected to in their acquisition of these skills. I don't know any seven-year-olds who would naturally turn to making such detailed work.

Here, "Allison Cooke Brown uses the materials of traditional women's handiwork to tug at the social conventions and gender rituals suggested by vernacular forms such as embroidery, lace-making, and cross-stitch. A widely-recognized fiber artist, Cooke Brown seems to delight in upending the implied, but often unspoken, social mores of such feminine items as delicate handkerchiefs and white gloves. In her ABC series, she embeds functional Quick Response (QR) codes in handkerchiefs that make explicit - and therefore undermine - ladylike social virtues: the codes work, so you can read them with an equipped cell phone."
I wonder about the forces in today's society that have prompted these 29 artists in "Piece Work" to turn to "slower" processes and a greater emphasis on materiality in their work.
Posted by Heather Dubreuil at 12:00 AM 1 comment:

Every fall, Stewart Hall in Pointe-Claire puts out a call to Montreal-area artists, asking for works in a variety of media to include in their art rental collection. The standard of work chosen is always impressive, and the show always well worth a visit.

I am delighted to have two of my works selected this year, Montmartre #1 and 53rd Street West. They will be on display in Stewart Hall's beautiful, brick-walled gallery from October 19 to December 1, 2013. Afterwards, they will be available for rental for one year through the Art Rental and Sale Service.

The vernissage for the show is on Sunday, October 20, at 2 pm, 176 Lakeshore Road, Pointe-Claire.

Gallery hours are Monday through Sunday 1 pm to 5 pm and Wednesday 1 pm to 9 pm.
Posted by Heather Dubreuil at 12:00 AM No comments:

Another glorious fall day in Montreal, and a perfect opportunity for the Women's Art Society of Montreal to arrange a custom-designed tour of Mount Royal Cemetery. 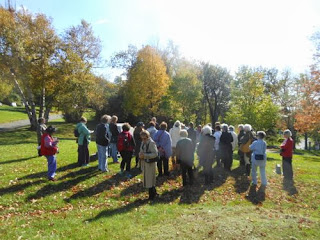 The cemetery is nowhere near as atmospheric as London's Highgate Cemetery. Having been neglected for several decades, many of the monuments in Highgate are crumbling, and virtually all are covered with moss. The trees grow right out of the graves, causing the monuments to tilt and topple. Some graves still show damage from World War II bombing.

Where Highgate is floridly Victorian in style, Mount Royal is classical. Where Highgate feels like a jungle closing in on the visitor, Mount Royal feels clean, serene, and spacious. The difference was surprising to me, as Mount Royal was established in 1852. I had been hoping to see some beautiful angel statuary, but they were few and far between, no doubt because Mount Royal began as a Protestant institution. 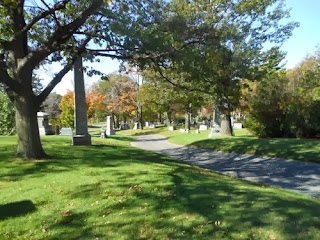 We were escorted around the site by Myriam, our very well-informed guide. She led us to the graves of several well-known artists: Edwin Holgate, Prudence Heward, Marian Scott, Marcelle Ferron and Guido Molinari, as well as those of collectors and benefactors. We saw the final resting places of the Maxwell brothers, both architects, and the famous photographer, William Notman. 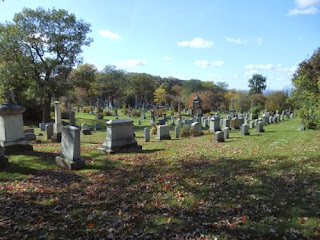 Tours on various themes are available to the public for free throughout the year. The 100 different kinds of trees on site are the subject of one tour, and birdwatching is the topic of another. A list of tours is posted on the cemetery's website each spring.

Email ThisBlogThis!Share to TwitterShare to FacebookShare to Pinterest
Labels: travel


The 80-member group, Artistes Hudson Artists, holds Spring and Fall exhibits every year. Usually more than 30 members display their work, and often more than 200 pieces are on display.

One of the rules is that each artist is allowed to show only one piece that has been seen before. All other work must be new. This keeps it fresh for regular visitors to the show, and keeps the members on their toes too.

Dates are October 18 - 20, with a vernissage on Friday, from 7:30 - 9:30 p.m. Saturday and Sunday hours are 10 a.m. to 5 p.m. A tea room is available, and a lovely autumnal watercolour by Ginette Parizeau will be raffled off in support of NOVA, our local home-nursing service.


I will have five pieces on display, and also some greeting cards and unframed work available. I'll be working the sales desk on Sunday from 10 till 1:30, and also plan to be at the vernissage.

The show is held at the Hudson Community Centre, 394 Main Road.

I do hope to see you there!
Posted by Heather Dubreuil at 8:38 AM No comments:

Here's an intriguing website that is a useful tool for those working with colour. 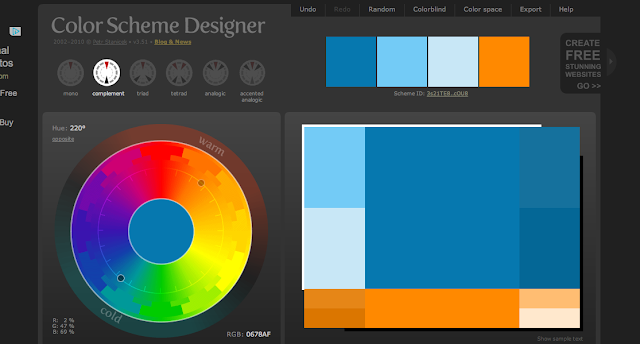 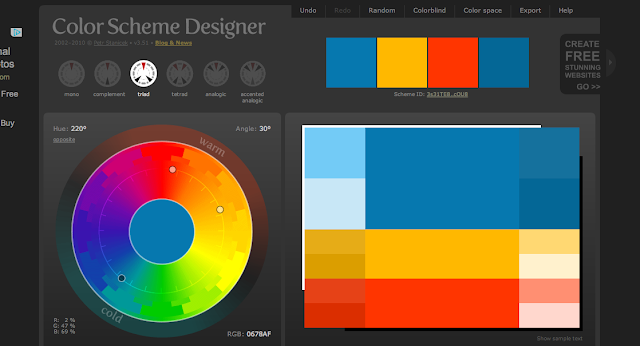 By clicking on the "Adjust Scheme" option, the user can adjust the saturation and contrast of the palette, as shown below. 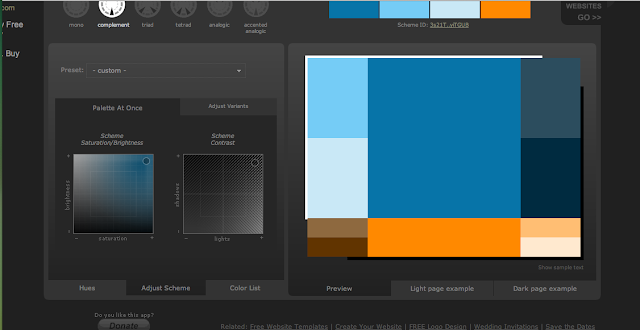 As well, the colours of the palette can be named, using RGB, Opaltone or Web identifiers (below).This is a great way to communicate precise colours with others. 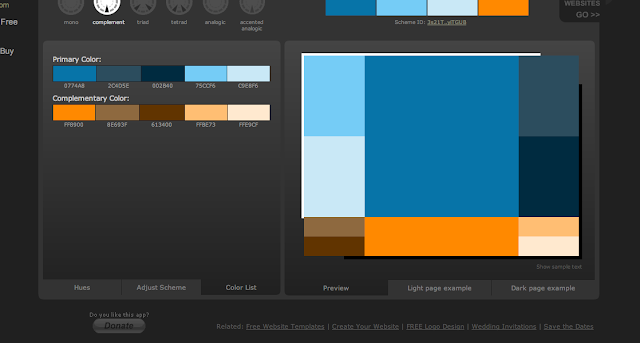 Intended for graphic and web designers, this site can be just the thing for artists looking for that perfect choice of accent colour.

Posted by Heather Dubreuil at 9:22 AM No comments: