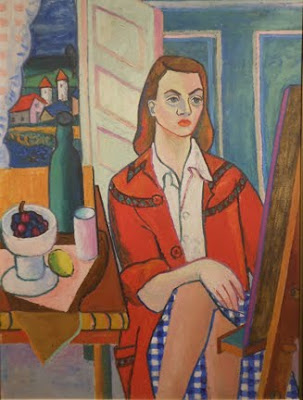 
Until September 10, our regional museum presents an exhibition of 33 portraits and still-lifes by Vaudreuil resident Lucyl Martel (1922-2015). The show concentrates on the period of 1940-1960.


Martel was a contemporary of the Beaver Hall Group, and studied for several years at the École des Beaux-Arts de Montréal. Her work shows a strong affinity for that of Matisse and the Fauves. The exhibition is sub-titled Une jeune artiste témoin de son temps, which translates to A young artist witness to her time.

Martel's portraits use a strong outline to flatten the spaces. There is minimal modelling of form. She uses pattern effectively and prefers bold, simplified shapes and interesting negative spaces. Her subjects are drawn from her circle of family and friends.


Martel's parents owned a cottage on Vaudreuil Bay, where the family spent the summer months. While there, Martel came to know Félix Leclerc and Guy Maufette, and she became involved in making costumes and sets for their theatrical productions.

She studied with Alfred Pellan, whose influence is strong in her work. As an instructor at the École des Beaux-Arts, Pellan organized the controversial 1945 exhibition of student work which challenged the academicism of its director. Works with nudity were modified by applying soap and gouache paint to the offensive bits so that they might be included in the show. This issue was so controversial that it led to the resignation of the school's director, Charles Maillard.


Martel exhibited her work actively, sometimes using the ambiguous signature Luc Martel, doubtlessly in an attempt to obscure her identity as a woman. She won prizes for her work and was shown in local galleries. After her student days, Martel was employed making architectural maquettes and then in the sets and props department of Radio-Canada.


The strong influence of the Catholic church delayed the participation of women in Quebec's public society at this time. Quebec women won the right to vote only in 1940. Lucyl Martel chose the life of a single career woman, living with her unmarried sister, until Madeleine's death in 2002. The sisters travelled frequently to Europe and New York to take in contemporary art and fashion.


A video photo-montage of Martel with her family and contemporaries is included in the current exhibition. Location, hours and times for the Musée Régionale de Vaudreuil-Soulanges are listed on their website.
Posted by Heather Dubreuil at 12:00 AM No comments:

This past week our text'art group had a very special opportunity to take a guided tour of Habitat 67. Montreal's landmark housing complex is normally closed to the public, but on the occasion of its 50th anniversary, tours will be made available throughout the summer. You can learn more about the tours and register for them by going to the website. 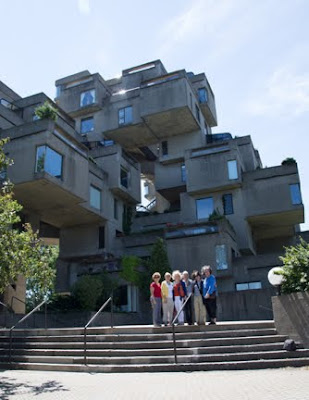 We were lucky to have a mild, sunny day for our visit, and a stiff breeze blew in from the river as we explored the impressive structure, led by our knowledgeable guide. Although it is considered to be in the Brutalist style, many of its features defy that categorization. The architect, Moshe Safdie, grew up in Haifa, Israel, and he drew on this experience when designing Habitat 67. For one thing, all but two of the 148 households have a private terrace garden. As well, communal garden spaces serve to bring together the residents and to create a sense of neighbourliness. The design is driven by a humanist concern for social connection and the individual's connection with nature, and influenced by the architectural model of the Pueblo village and the Mediterranean hillside town. 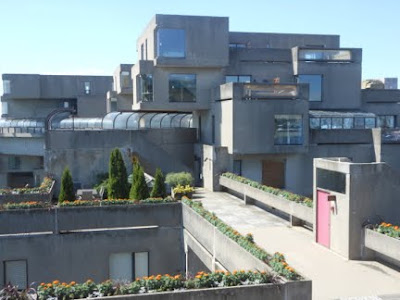 All of the units offer views in two or more directions, flooding them with light. And the views are astonishing. The complex is set on a quay, bordered on both sides by the St. Lawrence river, so residents and visitors enjoy panoramic vistas of Montreal's harbour, bridges and skyline. 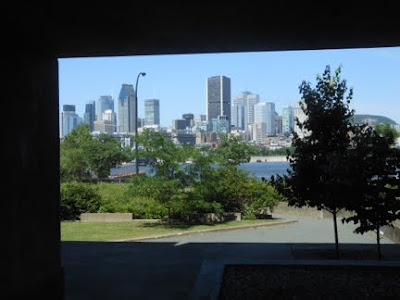 The complex was four years in the making, from initial design to near-completion for the opening of Expo 67. The architect was 25 years old, and the project represented his master's thesis. Safdie actually used Lego bricks to plot out his ideas. There are 15 different floor plans. Households are made up of anywhere from one to four modules. We were able to tour one of the smallest units, offering a very thoughtfully-designed 600 square feet of living space in its one module. Safdie himself owns a four-module unit. Some of the homes made of multiple modules are on two levels, with interior staircases. 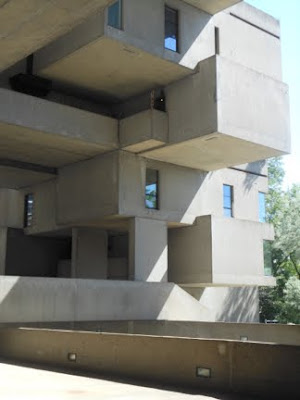 The building is 12 storeys high and is serviced by 6 elevators. As one walks through the "streets" and "alleys" formed by the interior, one is constantly surprised by open spaces and intriguing angles. 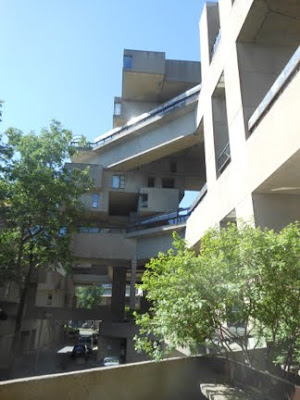 The concrete modules were cast on site. The theory was that this would be an efficient, economical approach to construction, and it might have worked out that way had Safdie been able to realize his much larger concept and better economies of scale. Originally the homes were all rentals, but since the mid-80's all have been privately owned. The exterior is protected by its status as a heritage site, while the interiors may be reconfigured to the taste of the owner. 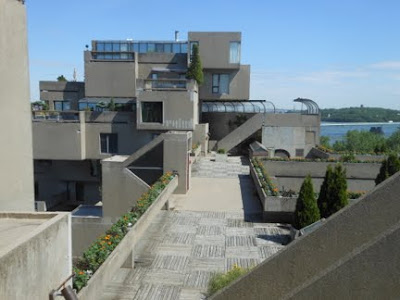 Touring Habitat 67 is a Montreal experience I would highly recommend. Tickets for the tours are selling quickly.

the UQAM Centre de design, 1440 Sanguinet, Montreal (Metro Berri) presents the free exhibition Habitat ’67 vers l’avenir / The Shape of Things to Come until August 13, Tuesday to Sunday, from noon to 6 pm.
Posted by Heather Dubreuil at 12:00 AM 4 comments:

I have finished a new piece! It measures 24" x 24", and is made of hand-dyed and painted cotton, quilted and stitched. It was inspired by a painted collage I made a couple of months ago, one of a series in orange-and-blue that I posted about at the time.


I laid the groundwork for this piece by producing lots of painted pattern on hand-dyed cotton. You can read about that process here. The images below show some of the results. 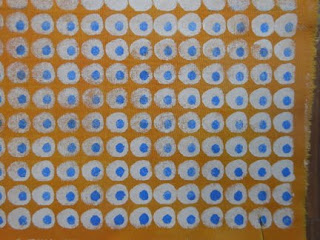 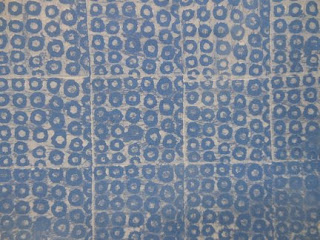 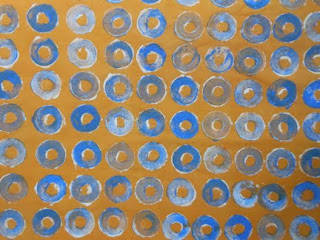 Then I printed out a photo of the inspiration piece, and blocked out the main shapes. I measured the different sections and figured that each shape would have to be roughly tripled in size. 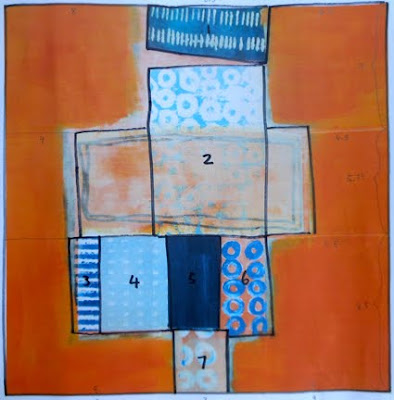 Because I was running low on the orange hand-dyed cotton that was to serve as the background, I pieced together a background using two different cottons. 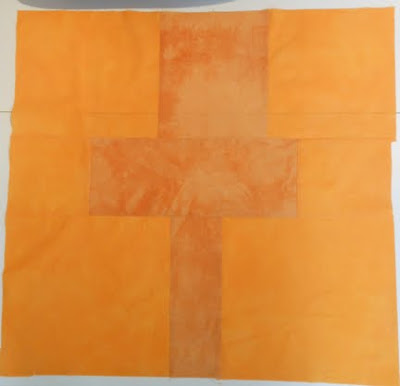 and cut out patterned pieces that corresponded to the various shapes in the original. 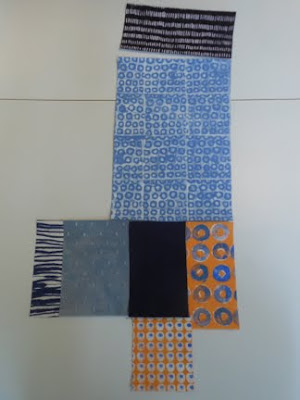 These shapes were backed with fusible web, and were ironed into place on the background. Then I went at the piece with fabric paint, experimenting with several brands to get the transparency I wanted. (I have Setacolor, Pro Fab from Pro Chem, ColorVie and Speedball that I have collected over the years.) I think the ProFab was the brand I settled on this time. (I understand that soft body acrylic paint from Golden or Liquitex is also suitable.) Of course my finished piece will never be washed, but as it was going to be stitched, I didn't want anything so stiff that it would show errant needle holes.

After the paint was applied, the "quilt top" was batted up, backed, and quilted with some "stitching in the ditch" around the patterned shapes, and some irregular horizontal lines in the orange background. I also outlined the major shapes with a scribbly blue line of thread, using free-motion stitching. This was meant to suggest the outline of blue paint seen in the original, a layering effect that I really liked. I applied a facing to the edge, a technique that didn't come easily to me, having let those needlework skills lapse for some time. 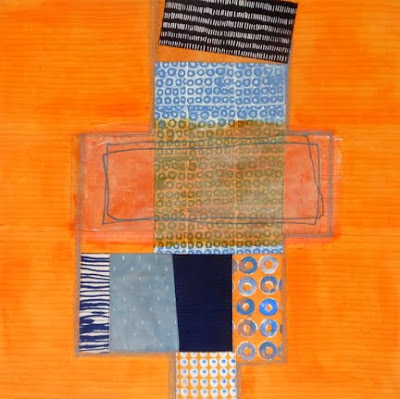 
I have yet to decide whether to mount this piece on a painted 24" square prepared canvas. Perhaps I will see if I can make a few others using the same approach, and then decide on the mounting. One alternative would be to use stretcher bars, or to allow enough surplus fabric to wrap the finished piece around a prepared canvas. Suggestions are welcome!

Spent some time on Montreal's iconic St.-Laurent Boulevard this weekend. The occasion? An eleven-day festival of mural-painting, involving twenty-three Canadian and international artists. Also on display are 63 murals created in the previous festivals of 2013 - 2016.

St.-Laurent Boulevard, also known as The Main, has a storied history, welcoming successive waves of immigrants. Some of the storefronts are pretty much what you'd expect, like this fluorescent-lit emporium of European sausage: 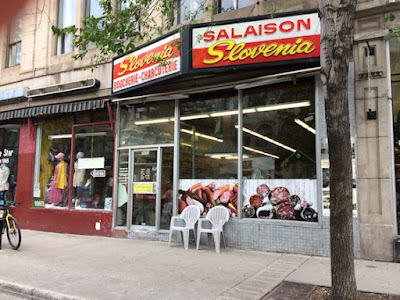 Others reveal a more contemporary aesthetic: 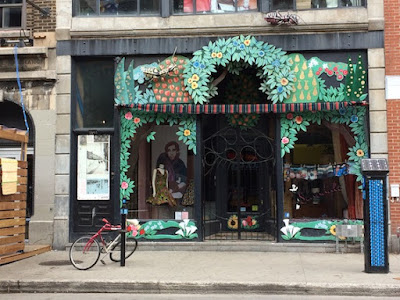 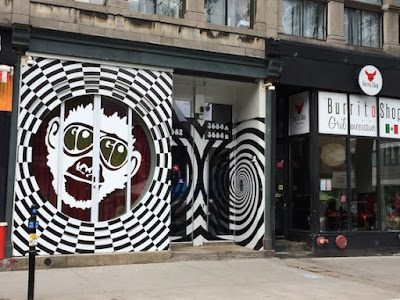 No matter the occasion, a Montreal festival has to have the following:

And now for some of the actual murals. The views of these works-in-progress were often obscured by equipment that lifts the artists to the upper reaches of their canvases.


Ninety-minute guided tours are available in French or English. Visitors are encouraged to download the mobile app for information about lectures, exhibitions, and concerts included in this fifth edition of the Mural Festival. Maps are posted and also available through the app or on-line. 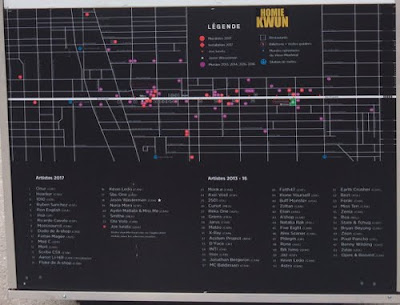 Two years ago, as part of a local collective project, I created a fibre piece titled "Greenwood: Layers in Time".


It was my tribute to Hudson's historic home, Greenwood, which dates back to 1732. Fourteen artists were each assigned an aspect of Hudson in celebration of its 150th anniversary. The project culminated in several showings of the collected works, and the images of the art were printed on banners that are still on display around the town.

The happy ending to this story is that my piece has been acquired by Greenwood. It's now on display in a room set aside for the historic artifacts that tell the narrative of the house. The lighting enhances the piece, and shows the textural detail to full effect, though in the photo below the colours appear a bit washed out.

I am thrilled at this outcome, and pleased that the image of the piece will now be included in Greenwood's promotional material. You can learn more about Greenwood by going to their website. And if you're in the area this summer, do consider a visit. Afternoon tea on the screened porch, overlooking the lake and extensive gardens, is a very civilized experience.
Posted by Heather Dubreuil at 12:00 AM 4 comments:


As part of Montreal's 375th anniversary, and with a nod to the 50th anniversary of Expo 67, the Montreal Museum of Fine Arts has organized an outdoor sculpture garden for all to enjoy. Stretching along more than one kilometre of our iconic Sherbrooke Street, the 30 large sculptural works begin near the McCord Museum and end near Concordia University. Made by both Canadian and international artists, all are well-marked and well-labelled. You can read more about it on the Museum's website.

The trail's eastern border, on McGill's campus, is marked with this exuberant female figure, the largest of Saint Phalle's Nanas.


and a giant Wolf, by Joe Fafard.


Along our way, we took time to appreciate some street scenes:


Finally, at the western border of the installation, we can see this monumental tower from British Columbia.


The Museum's website offers a detailed explanation of the iconography of the totem pole. Each figure plays its part in the re-telling of the residential school story.

The path along Sherbrooke Street is marked with flags from all the world's countries, almost 200 in all, and is lined with an exhibition of large images, Photographs of a Changing World.

"Visitors strolling by the sixty-seven stations along the route will see recent works by thirteen contemporary photographers. These Montrealers of various backgrounds have criss-crossed the planet to capture the state of the world with their cameras. Intimately linking art and life, their documentary and art photographs share a reflection: this urban photo album, based on the values of openness and tolerance, expresses our need to find better ways of living together on the planet we share."


The Ballade Pour la Paix will be in place until October 29, 2017, and will be a highlight of the city's anniversary celebrations.
Posted by Heather Dubreuil at 12:00 AM No comments: