My recent show at Galerie Valmi 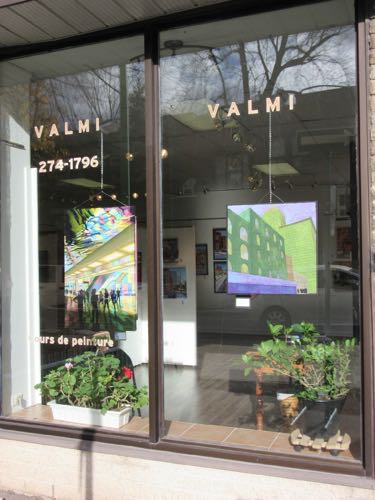 There is something special about seeing your work hung in a gallery, with white walls and good lighting. Here are some photos of my recent collaborative show with painter John Vazalinskas. Titled "Urbanité X 2", the exhibition ran from November 13 - 19 in Outremont. 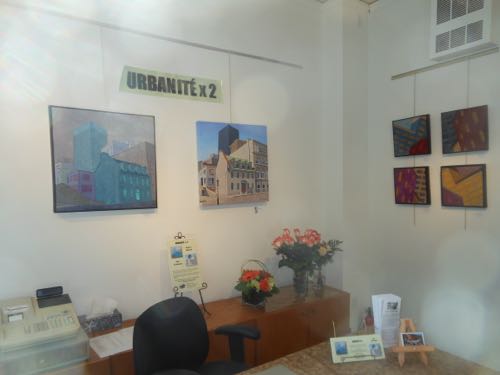 The focal point of the show was a single scene in Old Montreal, of which we each made a 24" x 24" piece in our own medium. The images of these two works were used for the promotional material. 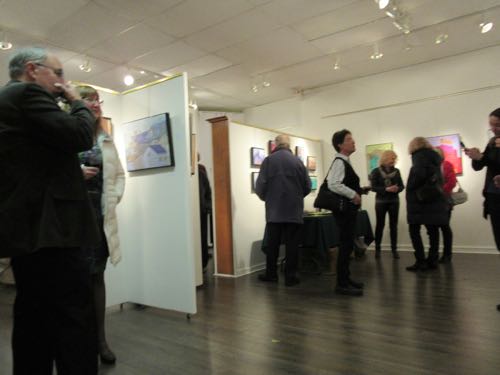 We had an opening on the Saturday evening that was very well-attended, and we each sold a large piece. 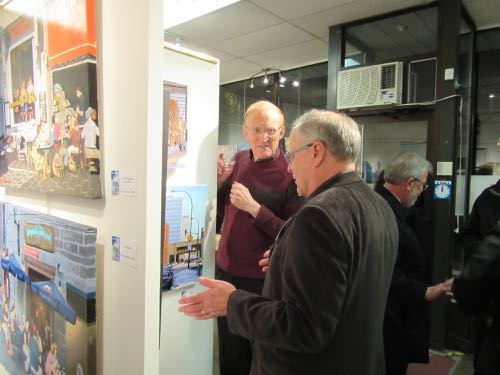 Here is John, explaining his work to my friend Peter Woodruff at the vernissage. It is so kind of my friends to come by the show and give their support. 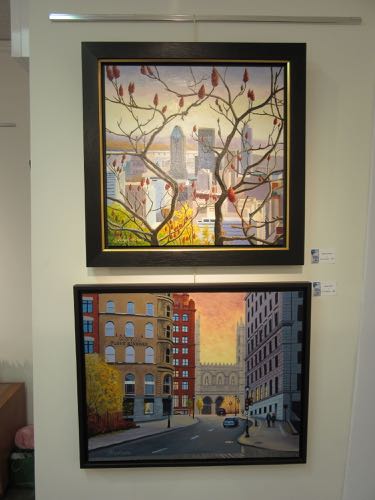 Here are two of John's works in acrylic. John often paints pastoral scenes but limited himself to urban landscapes for this show. We each had about 30 pieces on display. 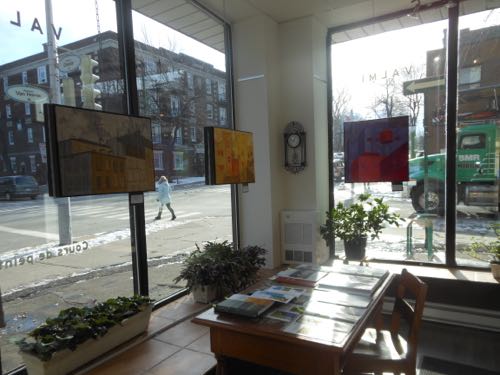 One of the challenges was figuring out how to install our work in the windows. John brought his engineering acumen to the problem, thankfully. We attached canvases of equal size back-to-back with door hinges. This allowed just enough separation for the hanging wire to be pulled up and attached to the chain-and-hook system. There will remain a couple of tiny holes from the screws on the back of the wooden stretcher bars, but they are barely detectable.

Small tabs of black cardboard were stapled to the lower edge of the pieces so that the labels could be attached.


Taking on something like this has its unexpected rewards. The show gave us exposure in a neighbourhood that was new to us. I met many interesting people and made some contacts that may prove helpful in the future.

Were there discouraging moments? Well, there was the Tuesday with the miserable weather when not a single person came into the gallery. At times like that, I remind myself of the words of Winston Churchill, “Success is going from failure to failure without a loss of enthusiasm.”

Email ThisBlogThis!Share to TwitterShare to FacebookShare to Pinterest
Labels: my shows, reflections

There's no way I could have walked past the gallery without stop in to see your amazing work. I love the concept of two artists interpreting the same scene in different mediums. Congratulations on the show!

Thank you, Vickie! I too love the concept of "mixed media shows". One of my hopes when I promoted this show was to encourage other quilt artists to consider collaborations like this, whether with ceramists, sculptors, printmakers, whatever!

The window display is very inviting, a good solution to the hanging issue. I wish that we had more galleries over here that encouraged this kind of collaboration.