Ninth in New Series: A Significant Other


Making progress with my goal of having twelve new pieces for a solo show in early January.

Like the others in the series, this one was made of hand-dyed linen, pieced, and measures 24 x 24. The swirl of activity in the upper right is created with a variety of couched threads.  The fuchsia on the left is not as intense as it shows in the photo.

Originally it was meant to have a different orientation, which I have shown below, and which would require a different title. Which do you prefer? 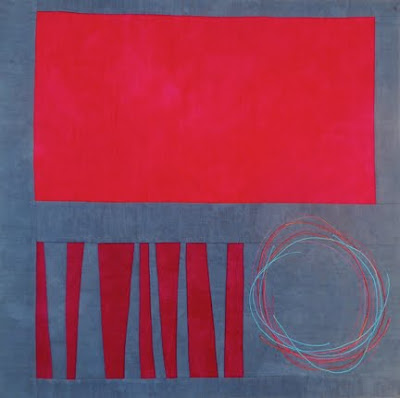 Posted by Heather Dubreuil at 9:43 AM

I'd say the first version is rather 'romantic' & open to possibilities/

The second is after they're married.

I prefer the first version, which seems seems more balanced. The second is a little top heavy

Thanks for your comment, Jinnie. I think I agree with you. Interestingly, I am taking another workshop with Jane Davies this summer. One of her goals is to get us to shake off our preferences for order and balance, in search of the more dynamic. I find that often in modern, abstract compositions the heavier weighted components are on the top. Possibly this is meant to convey instability?