"The Lady in Gold": the book

When I read the book "The Lady in Gold", I was reminded of the unforgettable painting by Gustav Klimt, created on the occasion of the closure of the Old Burgtheater in Vienna, 1888.

The final concert had been the event of the season for Vienna's elite, and it was a mark of prestige to be included in the 200 miniature portraits that Klimt included in the tableau.

In much the same way, Anne-Marie O'Connor's book is a portrait of a whole community, the Jewish elite of Vienna's Belle Époque, told through the life of Adele Bloch-Bauer and her dazzling portrait by Klimt.

I became interested in reading the book when I listened to a review on CBC radio. It was said that "The Lady in Gold" was a history book written like a novel, and that all history books should be as readable. I had seen the Helen Mirren film "The Woman in Gold", based on O'Connor's book, and had found the story fascinating. (My post on the film is here.) The book is divided into three parts: pre-war Vienna; the period of the Anschluss (the unification of Austria and Germany) and World War II; and the modern-day battle for the restitution of the painting by the Bloch-Bauer family and their heirs. 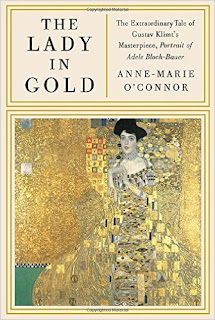 I admit that I had difficulty remembering the various players, both family and friends, over several generations, numbering well over 100. Though I've never diagramed out the characters while reading a book, I might have benefited from doing this for "The Lady in Gold". In spite of this challenge, I found the carefully-researched book riveting. The story of art treasures stolen by the Nazis is a compelling one, a tale that continues to unfold in today's newspaper headlines. Some of the painful questions that arise, to quote from the book's final page:

Though challenging and at times disturbing, this award-winning book is well worth reading. You will never look at Klimt's Portrait of Adele Bloch-Bauer 1 in the same way again.