... to have my work featured in the latest fund-raising campaign by SAQA (Studio Art Quilt Associates).

SAQA has given me many opportunities since I joined them some ten years ago. Right now one of my works is being shown at the Grants Pass Museum of Art in Oregon, having been accepted into an international show, Tranquility, staged by SAQA. It has already traveled to five major Australian cities, and three American venues.

Just a day or two ago I received this envelope in the mail:

accompanied by this letter: 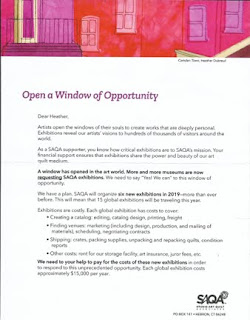 The graphic designer responsible for the campaign has done a fine job of using my compositions to enhance SAQA's communications, don't you think? And I appreciated the tagging of each image with my name and the title of the work (in very small print.)


... another of my works has been the inspiration for a different promotional campaign. The local "Museum of Living History", Greenwood, is focusing on their textile collection this summer, and chose one of my pieces as their promotional image. Originally made as a 40 x 30 textile work to be used for a Town of Hudson banner project, Greenwood: Layers in Time is now on display year-round at the museum.

I just may have to have more greeting cards printed up, featuring some of my Cityscape images....
Posted by Heather Dubreuil at 12:00 AM