The Secret Lives of Colour by Kassia St. Clair 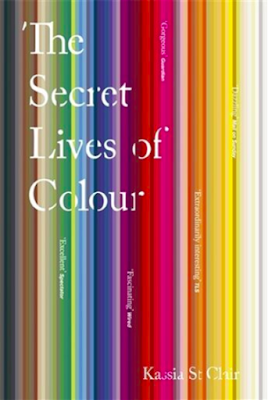 The basis for The Secret Lives of Colour, an NPR Best Book of 2017, is a collection of columns written by St. Clair for British Elle Decoration. She has created ten broad categories of colour and then profiled six to ten of the most interesting colours in each category.

We learn that some cultures had no words for a particular colour. The ancient Greeks did not recognize blue as a distinct colour, while Koreans have a word that distinguishes yellow-green from standard green. Russians have different words for light and dark blue. Newton's discovery of the colour spectrum eliminated white, black and brown from the discussion. Rembrandt's rich, chocolatey shadows were likely made of all the dregs on his palette. Colour was used to signify social status in many societies, while the Puritans eschewed colour altogether, as did the architect Le Corbusier.

This fascinating book draws upon art history, fashion, chemistry, and the history of commerce and trade to tell 75 most intriguing stories.  One example is "Mummy Brown", a pigment actually made from ground-up mummified bodies. It was sometimes called "Egyptian Brown", and was used in Europe between the 12th and 20th centuries.


"By the beginning of the 20th century demand was so sluggish that a single mummy might provide a paint manufacturer with pigment for a decade or more. C. Roberson, a London art shop that first opened its doors in 1810, finally ran out in the 1960s. 'We might have a few odd limbs lying around somewhere,' the managing director told Time magazine in October 1964, 'but not enough to make any more paint. We sold our last complete mummy some years ago for, I think, £3. Perhaps we shouldn't have. We certainly can't get any more.'"

When I received this book as a gift I couldn't put it down! Fascinating history of colours as they wax and wane.

I actually read it in one sitting, flying home!