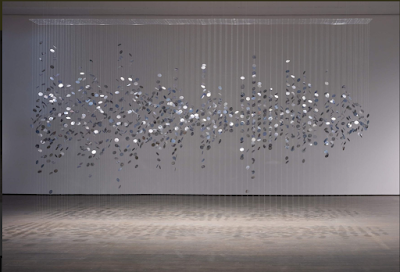 The Musée d'Art Contemporaine is currently staging a show of its recent acquisitions. Des Horizons d'Attente features the work of 21 Montreal-based artists. There are no traditional paintings in the collection. Instead, visitors are treated to some novel uses of materials like cloth, paper, wood and plastic. There is a particular emphasis on aboriginal issues and imagery.

"Myriam Dion pushes the fragility of paper to its limits by means of an infinitely meticulous precision knife (X-acto).... The delicate, slow, calm and solitary process required to produce this lace-like work represents the materialization of the artist's musing on the Syrian conflict and the migrant crisis rocking the planet. The installation Facade de recueillement takes up the architectural motifs of the façade of the Great Mosque of Aleppo, which was destroyed by the bombing...."

"water song [Kinosipi] is based on the sound spectrum of a song by Atikamekw singer and storyteller Karine Wasiana Echaquan."

"Using pyrography, a network of geometric motifs inspired by Indigenous graphic traditions is outlined on this large wooden support made of white cedar..., a tree native to Canada and considered sacred by First Nations. The mention of the term 'Lot # X' in the title, the horizontal cuts and the arrow symbols in the composition suggest the lots of land laid out following the forced uprooting of Indigenous communities over the centuries. Like a metaphorical map with a modern pictorial look, this work gives material form, through wood burning, to the confiscation of Indigenous lands and the scars it has left on Indigenous peoples".

The exhibition continues until September 19, 2021.