Our fourth and final session concentrated on brushstrokes. We were encouraged to develop dexterity with big brushes, loaded with lots of paint. Big, juicy brushstrokes create a sense of energy. Beginning painters are often too timid with their brushstrokes, making many fussy adjustments that make the final painting look overworked, rather than fresh.

Patti Mollica, teacher for the Winslow Art Center's "Paint Fast, Loose and Bold in Acrylic and Oil", demonstrated by using a 2" brush on a 6" x 6" canvas. Very impressive brush-handling! 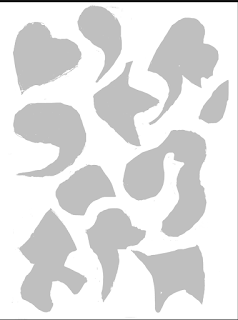 We were given a pdf with several awkward shapes (above), and tried to fill them in, without lifting the brush from the paper. In other words, with a single brushstroke. 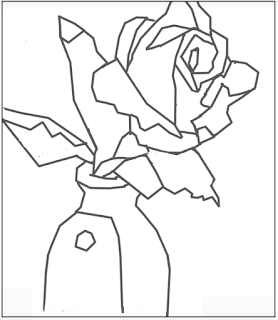 To follow up, we tried to fill in awkward shapes in this line drawing of a rose. Again, single brushstrokes only. One approach I tried to put into practice was the under-mixing of colour on the palette, giving a kind of variegated quality to a single colour.

Our final in-class assignment was to create a value study of a photo, and then to paint over the value study using as few strokes as possible. We were challenged to make the image using no more than 15 separate brushstrokes.

I quickly realized that my brush needed to be fully-loaded with paint, and moved up to a 1" brush. It was also clear that I would have to put some thought into the sequence of strokes (dark over medium-value? medium-value over dark?)
One non-essential stroke is the highlight down the side of the bottle. Also, I could have done with a single highlight on the bottle, rather than two. Five strokes were needed for the background alone.
As instructed, I created the value study in charcoal directly on the panel, then painted over it. But the charcoal lifted from the surface and mixed in with the goopy paint, darkening it. Should I have applied fixative to the charcoal? Or used graphite instead of charcoal?
More importantly, was this just an exercise to teach the importance of loading the brush, making big, unfussy gestures, and planning a strategy? Or is this actually how we're supposed to paint?
Alas, these questions will not be answered, as the class has ended. Your comments welcomed.
Posted by Heather Dubreuil at 12:00 AM